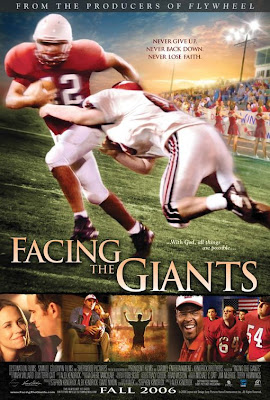 We love our inspirational, heart-warming football movies around here. It’s even better when they’re based on a true story, which, as far as I know, FACING THE GIANTS isn’t. Or maybe it is. From the looks of it, the fine folks at Sherwood Baptist Church in Georgia got together and said, “Hey, let’s make a movie.” Many of the young actors playing members of the football team from the fictional “Shiloh Christian Academy” are actually members of the Sherwood Christian Academy team. The actress playing the head coach’s wife is the wife of the real head coach. Alex Kendrick, the actor playing the head coach, also co-wrote and directed the movie, and the closing credits include a lot of other people whose last name is Kendrick. In other words, this is a pretty low-budget, backyard production with a heavy emphasis on religious values in addition to the usual sports movie elements.

It’s also, perhaps surprisingly, a pretty entertaining film. The production values are very good, the script has some nice humorous lines to offset the preachy moments, the small-town setting is absolutely authentic, and the acting, while not smooth and polished by any means, has enough realism to it to make it effective. These people aren’t just delivering lines, they’re tapping into things that come right out of their own lives. And the football scenes are nicely realistic, something I always pay attention to in movies like this, except for one last-minute plot twist that would never happen in real life. I wouldn’t recommend FACING THE GIANTS for everybody, but if you like sports movies and aren’t bothered by the religious angle, it’s worth watching.
Posted by James Reasoner at 9:36 AM

The whole intent of Facing The Giants is NOT to be a sports movie. The true message conveyed is centered within putting one's faith in God... not to win football games (that's pretty shallow) but to serve Him and give Him your praise and give Him your best, regardless of life's situations.

To the best of my knowledge the movie was not based on a true story. But I will say that many of the events depicted in the movie are things I've known to happen to people throughout life and the key element was their faith and trust in God.

My name is Monique & I'm part of the PR team for Sherwood Pictures--creators of FACING THE GIANTS.
Thank you so much for supporting the movie on your blog! We wanted to keep you informed of their latest project--FIREPROOF.
It's due to hit theaters this September in theaters nationwide. You can go to www.fireproofthemovie.com to view the trailer, read the synopsis, and sign up for updates to stay up to date with all of the FIREPROOF happenings! If you're interested in learning more or need any resource, pictures, and downloads for your blog please email me at monique@lovell-fairchild.com and I will be happy to get you what you need.