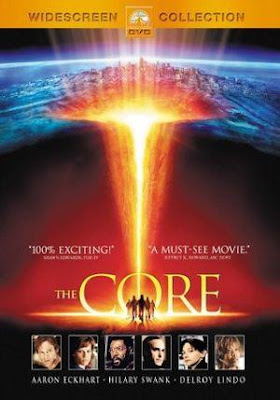 We missed this movie when it came out a few years ago, so when we came across a copy of the DVD at the library we decided to go ahead and watch it. It’s a near-future scientific thriller about how the earth’s outer core stops rotating for some reason, which causes the electro-magnetic field around the planet to start dissipating, which is going to lead to all sorts of disasters and ultimate destruction unless an intrepid team of scientist/adventurers can bore down to the earth’s core in a special vessel made of Unobtainium (to quote Dave Barry, I am not making this up) and restart the core’s rotation by setting off a series of nuclear explosions.

Now, Mr. Wizard I’m not. But if that plot description sounds pretty far-fetched to you, well, it does to me, too. This is definitely a movie that requires a large amount of suspension of disbelief. If you can shrug your shoulders, though, and say, “Okay, I’ll buy that”, it’s fairly entertaining. Lots of special effects and lots of dialogue like “We’re approaching the core/mantle interface!” Aaron Eckhart is a brilliant, ruggedly handsome scientist. (Brilliant scientists in movies are always ruggedly handsome, although it’s acceptable for them to have brilliant scientist sidekicks who are semi-nerdish. Unless of course the brilliant scientist is female, in which case she’s intelligent-looking but still hot.) Hilary Swank is the former astronaut who pilots the ship going to the earth’s core. She’s very capable and intelligent-looking -- but still hot. As for the rest of the crew . . . well, you can pretty much figure out what’s going to happen to them.

Which is another problem that THE CORE has. If you’ve ever seen any other movies in the near-future scientific thriller genre, or read any books like that, you’ll know everything that’s going to happen ’way before it does. There was one minor twist near the end that I didn’t see coming, but I should have.

Despite my sarcasm, I did enjoy this movie. It’s silly and predictable, but there are some nice lines of dialogue and I was able to accept the spirit of the whole thing. I was a little disappointed that they went all the way to the Earth’s core and back, though, and didn’t stop even once in Pellucidar.
Posted by James Reasoner at 12:26 PM

I enjoyed this one myself. One of the movie's writers, John Rogers, has a physics degree and swears that much of the science is accurate. I don't have a physics degree, so I can't say.

I confess to having seen and enjoyed this movie in the theater. I mean, any movie with Unobtanium in it is bound to be my kind of movie.

Real physics sounds pretty far-fetched to me, so I'm perfectly willing to give Rogers the benefit of the doubt.