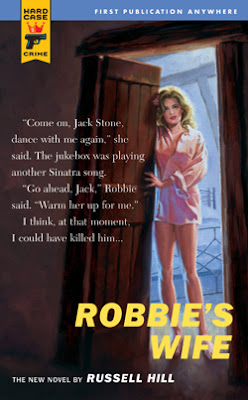 ROBBIE’S WIFE isn’t your usual Hard Case Crime novel (if there is such a thing, which is debatable). For one thing, it’s set in England, not America. Of course, there have been other Hard Case Crime books set in other countries. David Dodge’s PLUNDER OF THE SUN and THE LAST MATCH come to mind. Also, ROBBIE’S WIFE is extremely slow-paced, instead of zipping along like most of the other HCC books I’ve read.

Plot-wise, though, it fits right in with the rest of the line, centering around a doomed romance between a burned-out American screenwriter and a beautiful English farm wife who regrets giving up her life as a dancer. Although Russell Hill (an author I’m not familiar with) takes a long time to get around to it, before the book is over we get murder and blackmail and a couple of plot twists. Not everything works out as I expected it to, which is always a plus. The writing is good enough, and the story and characters intriguing enough, so that I never considered abandoning the book but stuck with it instead, and I’m glad I did. Although my tastes run more toward Gil Brewer’s THE VENGEFUL VIRGIN, another Hard Case Crime novel I read recently, I don’t have any hesitation in recommending ROBBIE’S WIFE, too.

And as usual with Hard Case Crime, this book has a really nice cover.
Posted by James Reasoner at 12:54 PM