The Song is You -- Megan Abbott 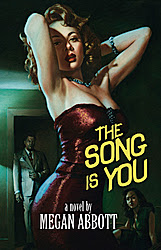 In discussing the slam-bang pace of Gil Brewer’s THE VENGEFUL VIRGIN the other day, I mentioned that some authors prefer to take a more deliberate approach. Megan Abbott falls into that category. Her stories unfold at a leisurely, nuanced pace, rich with characterization and detail and plot twists. Her excellent second novel, THE SONG IS YOU, strikes a near-perfect balance between those elements.

This book was inspired by the real-life disappearance of actress Jean Spangler in 1949, and historical characters appear throughout the story, interacting with Abbott’s fictional creations as her protagonist, movie publicist Gil “Hop” Hopkins, tries to find out what really happened to Spangler. Hop finds more than he bargained for, including connections between his own life and that of the missing woman that he never dreamed existed. His search is that of the classic hardboiled hero looking for the truth, even though he knows he may not like what he finds. Many of the scenes strike the same chords as the classic black-and-white film noirs; you can almost see the rain glistening on the streets and hear a saxophone wailing. Yet Abbott manages to put her own distinct spin on the proceedings, so that she’s not just imitating what has gone before. The fact that she’s one of the best in the business at structuring sentences certainly helps.

At times in Abbott’s first novel, DIE A LITTLE, I thought she went a little overboard with the period trappings, but that’s not the case here. The plot in THE SONG IS YOU took a couple of twists I wasn’t expecting and one major one that I was. But even though I anticipated the ending, it was still very effectively done. As good as DIE A LITTLE is -- and it’s very good -- THE SONG IS YOU is better all around. I recommend it highly.

Excellent review. Loved both books. Not sure if I'd take the second over the first, but it's a close call and either book will satisfy.