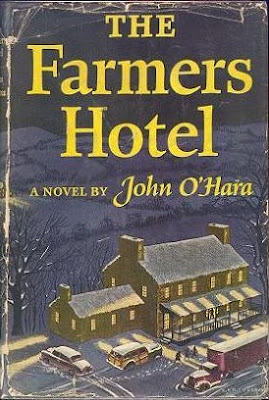 A lot of authors have used the old plot of having a group of strangers thrown together by circumstances and then seeing what happens among them. John O’Hara does it in a short novel from 1951 called THE FARMERS HOTEL. Set in a small town in Pennsylvania, the story finds a rich couple from Philadelphia who are married (but not to each other), a trio of small-time entertainers (a couple of strippers and their piano player), and a sullen truck driver who drinks too much all forced by a blizzard to stop at the hotel of the title, which, as it happens, has just reopened under new ownership. The middle-aged hotel owner, the cook, the black bellman/bartender (who has an adventurous history involving World War I and gangsters), and the local doctor are also on hand.

As usual with O’Hara, there’s lots of dialogue, most of it very well-written. The story gets darker as it goes on, and the ending is downright bleak. I gather from what I’ve read that this isn’t regarded as one of O’Hara’s better novels; in fact, some critics at the time called it his worst. I haven’t read enough of his work to make any judgments of that sort. But I can say that I enjoyed THE FARMERS HOTEL quite a bit, and it only makes me want to read more of O’Hara’s books.
Posted by James Reasoner at 1:23 PM

I just finished this today. It can be read in a few hours. I also enjoyed it. I would like to begin Appointment in Samarra next.

I have a question for anyone who has read this work: (not a spoiler)

Does it seem to you as though Mrs. Fenstermacher wound up spending the night with the piano player, or did she (innocently enough) actually take the room adjacent to the two Pickwick sisters by herself? Perhaps she did and it was supposed to be obvious but it escaped me and I had to re-read the whole passage and was still left wondering. Probably a minor point of order but would serve to shed a little more human and moral fragility to the story. Thanks!

According to your reviews, I have realized that O'Hara is a great writer. I also want to read more of his books!!! Buy Viagra Viagra