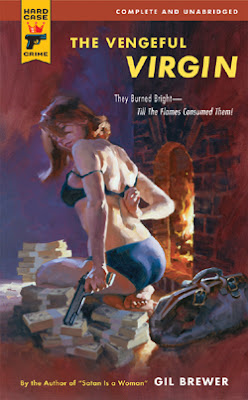 Despite having most of Gil Brewer’s books on my shelves, I’ve read only one or two of them. He’s one of the Gold Medal authors I haven’t really gotten to yet. But I don’t have the original edition of THE VENGEFUL VIRGIN, a Brewer novel from 1958. Thanks to the recent Hard Case Crime reprint, I don’t have to have the original, and now that I’ve read it, I think I’ll be pulling some of those other Brewers down from the shelves.

The scenario in THE VENGEFUL VIRGIN is a familiar one: the narrator is a working man (in this case, the owner of a TV repair and electronics shop) hungry for a big payoff. He meets a beautiful young woman who’s stuck taking care of her wealthy, invalid stepfather. It’s what Brewer does with this set-up that makes this such a fine novel. Some authors would take half the book to develop a slow, psychological build-up, and that’s certainly a valid approach. Brewer, on the other hand, has his characters screwing like minks on the kitchen floor and plotting to kill the old man almost before they -- and the reader -- know what’s happening.

They come up with a decent plan, too, but as always, events don’t play out exactly as they’re supposed to. The fast pace continues all the way through the book as more and more goes wrong and one murder leads to another. There are some striking scenes starkly illuminating the lust and greed that are the twin essences of noir fiction. Brewer’s prose is simple but powerful and carries the reader along. There’s probably not much here that will surprise a veteran reader of this sort of novel, but I had a thoroughly enjoyable time watching Brewer work at his craft.

And isn’t that a great cover? Ties right in with what happens in the book, too. THE VENGEFUL VIRGIN gets a strong recommendation from me.
Posted by James Reasoner at 12:16 PM

Brewer is my favorite crime writer. Good to see him back in print. And getting some attention. I'd recommend Red Scarf-- a tight, compelling masterwork that I like to think of as the greatest 50's movie never made. Cast Mitchum in the lead and let Phil Karlson direct. Shoot it in color and play for keeps.

Sounds absolutely great - I've liked almost all of the Brewers I've read and some people have told me that I even read the wrong ones!

Always liked his short fiction, and have only picked up one or two of his novels. Time for more, it seems.