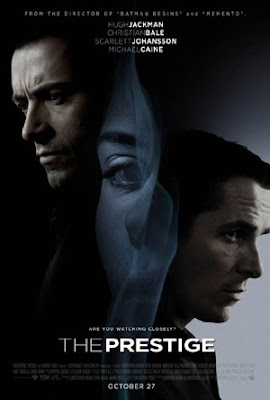 THE PRESTIGE is one of the magician movies that came out fairly close together a while back, THE ILLUSIONIST being the other. I liked THE ILLUSIONIST fairly well. While THE PRESTIGE got better reviews, as far as I remember, I didn’t think it was as good.

It’s certainly clever, well-written, and well-directed, with good performances from Hugh Jackman and Christian Bale as feuding stage magicians and Michael Caine as the designer and builder of the illusions used in Jackman’s act. I found the story extremely difficult to follow, though, as the plot kept jumping around in time. And I’m still not sure I understand the ending. But maybe I was just too tired to keep up with all of it. Normally, I like movies (and books) where nothing is what it appears to be at first, so I’m inclined to give THE PRESTIGE the benefit of the doubt and say that it’s probably a better movie than I thought it was. This may be one of those I have to watch again sometime, just to see if it improves on a second viewing even though I’ll already know the plot twists.

Or maybe not. There’s a lot out there to watch that I haven’t seen yet.
Posted by James Reasoner at 2:07 PM

I agree 100%. The time jumps were confusing and I thought the whole thing was needlessly oblique.

Thirded. The Illusionist was pure magic. This was something less.

The gimmick of the Bale character, carried over from the novel, is an example what I tend to think of as "English dumb," from a tendency of certain Brits at least to reach for this kind of clever-stupid plot device (Banks's THE WASP FACTORY hinges on another example). I think I understand the ending, and I liked the film about as well as the less-complex ILLUSIONIST...but that revelation, and all it implied, was a real Come On! moment.