The Case of the Sun Bather's Diary -- Erle Stanley Gardner 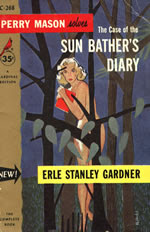 This Perry Mason novel was originally published in 1955, an era during which Gardner’s work was still consistently good, although as far as I’m concerned his best books were published during the Thirties and Forties. The edition pictured is the first paperback, from February 1958. I have no idea why there was a three-year gap between the William Morrow hardback and the Cardinal paperback.

As for the story itself, it starts off in a typically intriguing Gardner fashion: Perry Mason receives a phone call at his office from a young woman who wants to hire him. It seems that she lives in a trailer, the small kind that can be pulled behind a car, and while she was out sunbathing -- nude, of course -- somebody stole the car and trailer, literally driving off with her home. She wants to hire Mason to bring her some clothes and find out who stole the trailer.

Well, you know there has to be a lot more to it than that in an Erle Stanley Gardner book, and of course, there is. It turns out the young woman is the daughter of a man who is serving time in prison for masterminding an armored car robbery, and wouldn’t you know it, the nearly four hundred thousand dollars in loot that was stolen in that robbery has never been found. The daughter is convinced that her father is really innocent and wants Mason to prove it. Meanwhile, various factions are equally convinced that the daughter really knows where the money is hidden. Sure enough, once Perry Mason gets involved in the case, it’s only a matter of hours before there’s a murder, and Mason’s client is arrested and charged with the crime.

I thought I was doing a pretty good job of keeping up with the plot in this one, something I often have a hard time doing in a Gardner novel. I spotted some clues, recognized some misdirection, and was convinced that I had the solution figured out. Then, with only a few pages left in the book, Gardner throws in a perfectly logical twist that I never saw coming at all. I wound up being about half-right in what I figured, and for a Perry Mason novel, that’s not bad, I suppose.

This book is also interesting because of the trailer angle. Gardner was known for going off to the desert and staying for weeks at a time in a trailer, so he puts his knowledge of such things to good use here, throwing in a few nuggets of information about how such trailers are set up and what they’re worth.
The Mitchell Hooks cover on the paperback edition is okay, but if ever a book was crying out for a McGinnis cover, you’d think that one with a title like THE CASE OF THE SUN BATHER’S DIARY would be it.
Posted by James Reasoner at 1:33 PM

I go through periods every couple of years where I read some Perry Mason novels. They're loads of fun, always fast moving and loaded with twists. I think Gardner dictated and you get a lot of that kind of shining through:

"Paul, I want you to get a speedboat, two bathing beauties and a coffee can and go up and down the riverfront creating a spectacle. At 2 p.m. put your watch in the coffee can and throw it overboard near the Johnson dock..."

Maybe not quite like that, but it's always exciting stuff.

For me, the great thing about the Mason books is that, while none of them are grand slams, none of them strike out looking either. The ones that aren't worth re-reading some time later are pretty rare. Plus, there's quite a change in tone from the early efforts to the later ones.

Didn't Dorothy Hughes tell the story in her bio of ESG that he dictated a book over a weekend and when his transcribist listened to it she told him he'd already written that one and he got miffed because he'd wasted two whole days?

This novel seems to be very interesting. I am thinking in began to read some books of Perry Mason series, but I have different options to do it. Which book you recommend to me? Buy Viagra Viagra