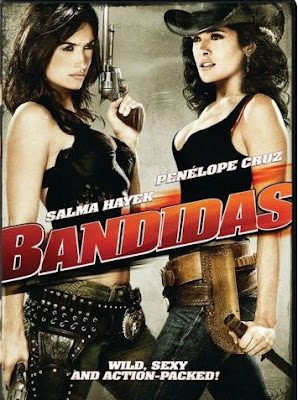 BANDIDAS isn’t your typical Western, although it has some of the traditional elements of one. You’ve got financiers and railroad tycoons plotting to steal land from poor farmers. You’ve got a pair of noble outlaws who fight back by becoming bank robbers, like Frank and Jesse James. You’ve got an arch-villain (Dwight Yoakum chewing the scenery for all he’s worth) with a bunch of evil henchmen. You’ve got beautiful, sweeping landscapes and stirring music.

But instead of the American West, this movie is set in Mexico. Instead of Frank and Jesse, or even Butch and Sundance, the outlaws are women -- Salma Hayek playing the daughter of a banker double-crossed and murdered by his partners, and Penelope Cruz as the daughter of one of those poor farmers. You’ve also got frontier forensics, a tic-tac-toe-playing horse, an adorably ugly dog, an incredibly fast pace, and a lot of well-staged action, including some running around on top of a moving train, one of my favorite types of scene (as anyone who’s read very many of my books can probably guess). Oh, and cleavage. Can’t forget the cleavage. The only actual nudity involves Steve Zahn, who plays a detective (that’s where the forensic stuff comes in, too). There’s also a catfight or two, since the characters played by Hayek and Cruz don’t get along at first, before teaming up to become famous as Las Bandidas, the Robin Hood-like bank robbers.

If you’ve read this far, you should be able to tell whether or not this is your kind of movie. I loved it. It’s not a great film, but it is a heck of a lot of fun and the same sort of thing that I try to do in some of my house-name Westerns.
Posted by James Reasoner at 1:57 PM

This is next on my Netflix queue. Far too often lately, you're one step ahead of me. I don't know if I'm gaining ground or losing it.

Did you notice on the movie poster that the two ladies names are reversed in relation to the pictures?

Cleavage? I guess that makes four reasons to see it. I'll add it to my Netflix queue, too.

Sounds like a good movie - the 'fun' quotient is underrated.

As for the names, it's probably one of those "Who gets top billing?" things. One gets her picture first, the other gets her name first. Either way, you can't go wrong.

I'll bet this one was a joy to shoot, as I think Penelope Cruz is almost a foot taller than Salma Hayek.

I never noticed the business about the names or the height discrepancy between the ladies. I guess I was concentrating too much on their other, uh, physical attributes.

I'll be looking out for this DVD, too. Like James, I like this particular mix of "western" with "fun". It's what keeps me engaged as I write my fifth book in the Misfit Lil series.

Not a bad addition to the Lady Outlaw subgenre (which would include the Belle Starr movies, "The Dalton Girls" from the '50s, the Mrs. Sundance TV movies of the '70s ... and Madame .45 from the Johnny Thunder western comics) ... but I could have done without the flash of Steve Zahn's bare butt.

My local Blockbuster (make your own joke here) is dumping its excess used copies of this one rather inexpensively, and I almost picked one up yesterday. Might just do so in the near future. Your local Bb or other chain or non-chain video store might be doing likewise. Wonder how Cruz's Spanish accent sounded next to Hayek's Mex-Am...oh, wait, no one's paying attention to the accents (Cruz's VOLVER last year was pretty fun, too).