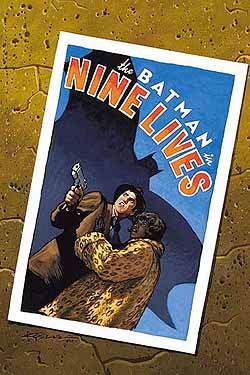 This graphic novel is part of DC’s “Elseworlds” series, alternate histories of some of their comic book characters, if you will. In this heavily film noir influenced version of Batman, only Bruce Wayne and his caped alter ego are roughly the same as in the comic books we all know. Instead of Robin, Dick Grayson is an ex-cop, currently making his living as a private detective. His long-suffering secretary is Barbara Gordon, the daughter of Commissioner Gordon. The Joker is a gambler, the Penguin and Clayface are two of Gotham City’s gangsters, Mr. Freeze is the Penguin’s enforcer, Harvey Dent is a crooked, “two-faced” attorney, and Selina Kyle is a blackmailer and the owner of the Kit Kat Klub, rather than Catwoman. The look and trappings of the story place it in the Forties, and it’s a suitably convoluted yarn featuring a bunch of shady characters, narrated by Dick Grayson in the usual PI voiceover style.

This is a very entertaining book and probably would be even if you were reading it as a straight mystery and had never read any of the other versions of the Batman character. Being able to appreciate the differences just adds another level of enjoyment. The script is by Dean Motter, the art by Michael Lark, and I’d recommend it to any Batman and/or noir fans.
Posted by James Reasoner at 1:26 PM