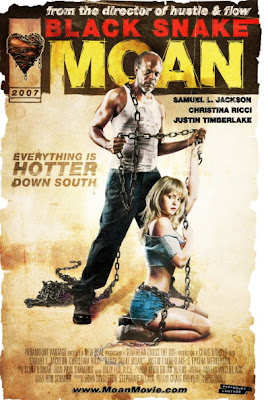 Look up the word “lurid” in the dictionary and you’re liable to find one of the posters for the movie BLACK SNAKE MOAN. Most of you have probably either seen the movie already or at least know what it’s about: a blues-playing farmer in the South, played by Samuel L. Jackson, chains the local slut, played by Christina Ricci, to his radiator so that he can break her from her sinful behavior. It’s a pretty far-fetched premise, but writer-director Craig Brewer and his cast make it seem perfectly reasonable. There’s some scenery-chewing, but everybody plays it pretty much straight, which goes a long way toward making the audience believe in what’s going on.

This movie is part updated Gold Medal backwoods novel, part Southern gothic, and part country noir. It actually reminded me of Daniel Woodrell’s novels more than anything else. The music plays a large part in it, too. I’m not a big fan of the blues, but the songs really work here. Maybe I’m just a sucker for redemption stories, but at its heart, even with all the sex, violence, and cussin’, I think BLACK SNAKE MOAN is more of a Christian movie than, say, FACING THE GIANTS (although I’m sure the folks at Sherwood Baptist Church would disagree with me). This is a very good movie, maybe even a great movie, and easily the best new film I’ve seen so far this year.

(In the spirit of fairness, I should add that I’m the only one in the Reasoner household who feels this way. But I’ve been the oddball many times before, and I’m sure I will be again in the future.)
Posted by James Reasoner at 7:39 PM

I can't get past the ad pictures, which just seem horribly demeaning to women. But I know a lot of folks who liked this movie. Plus, although I haven't seen it, I know the plot from what other folks tell me about it and the first time I ever saw an ad for it I predicted exactly what it was going to be about. I just can't imagine I'd like it.

I reviewed the picture for our alternative newspaper here in OK City and, yup, "lurid" is the right word. I thought the Southern Gothic elements went over the top and predicted that the movie would be remembered for all the wrong reasons. It was good, though, to see Jackson and Ricci stretch away from their usual screen characters.

Only 18+
Christina Ricci in the scene from “Black Snake Moan”