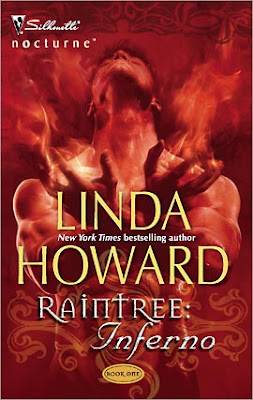 Paranormal novels are hugely popular in the romance genre right now, as some of you probably know already. I suppose this boom was prompted by the success of TV shows like BUFFY, ANGEL, CHARMED, etc., plus the best-selling status of novels by Laurell K. Hamilton, Charlaine Harris, and others. Silhouette Books has started an entire line of paranormal romance novels, the Nocturne series.

RAINTREE: INFERNO is the first book in a trilogy within the Nocturne line, about a centuries-long war between two rival clans of wizards, the Raintree and the Ansara, who have varying powers, most of them somehow connected to the elements. Dante Raintree, the hero of this novel, is a Fire Master, able to start and control fires, heat, smoke, etc. The heroine is Lorna Clay, a “stray” wizard, not aligned with either side in the war and in fact unaware of it -- and her own powers -- until she stumbles into an attempt on Dante’s life by agents of the Ansara.

There’s enough sexual tension here for the book to qualify as a romance, but for the most part it’s actually more of an urban fantasy/suspense novel. The author, Linda Howard, is a veteran romance writer who has produced work in several different sub-genres, including some mainstream romantic suspense novels that I’ve read and enjoyed. She’s a very smooth storyteller and keeps the pace rolling along in this book until it reaches a cliffhanger ending that has me thinking I’ll probably read the other two books in the trilogy.

I’ve read quite a few romance novels over the years, mostly of the historical and romantic suspense varieties. Teresa Medeiros and Marsha Canham are probably my favorite romance authors. Medeiros’s BREATH OF MAGIC is one of the best-plotted time travel novels I’ve read, and Canham’s medieval adventures are full of well-written action. So it’s not surprising that I would read some of these Silhouette Nocturne books, but in the spirit of full disclosure, I admit that I have an ulterior motive. Livia’s going to be writing a book for the line, which means that sooner or later I’ll be reading and editing the manuscript. So I want to get a good feel for the style and pacing of the novels they publish. RAINTREE: INFERNO was the second Nocturne I’ve read. The other was BLOOD SON, a vampire novel by Erica Orloff, which I also enjoyed quite a bit. I’m sure I’ll be reading more.
Posted by James Reasoner at 4:35 PM

Good to hear that Livia's going to do a book for the new line. Vampires? Wizards? Or can you tell? Under her own name?

Apologies, James, I just couldn't resist. Say, is that Ansara clan descended from Michael Ansara, who played Cochise in the TV show BROKEN ARROW? Are the Raintrees from Raintree County?

Vampires. And vampire hunters. I've read the proposal. Lots of action. I think the by-line is going to be Livia Reasoner.

I had the exact same thoughts about Michael Ansara and Raintree County.

Be sure to let us know when it comes out. I love vampires.

Mmm... well, the characters of this book are not vampires at least... Some people criticizes the past trend of depicting epics stories in media, but I preferred that than this present paranormal pseudo-romantic trend. Buy Viagra Viagra