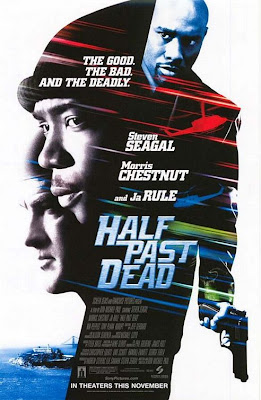 I wasn’t expecting much from HALF PAST DEAD, but it turns out to be a pretty nice little action thriller that’s also a prison picture and hostage drama. The plot revolves around two hundred million dollars worth of gold bars that were stolen nearly two decades earlier and never recovered. The mastermind behind that robbery was caught, tried, and convicted of murder because several federal officers guarding the gold were killed when it was stolen. Now that mastermind, the only one who knows where the gold is hidden, is about to be executed in a fancy, high-tech execution chamber on New Alcatraz. Naturally, several different factions, both good and bad, make last-ditch efforts to find out where the gold is before it’s lost for all time.

Steven Seagal is getting pretty beefy, but he can still pull off the action-hero bit. Morris Chestnut does a good job as a small-time crook roped into something much bigger than he realizes. Author and TV producer Stephen J. Cannell has a cameo as a prison warden. Lots of stuff blows up real good, and there are plenty of shoot-outs and last-minute rescues, all of it zipping past at a pace that gets things wrapped up neatly in an hour and a half. Good stuff if you like this sort of film, and since I do, I say it’s worth a look.
Posted by James Reasoner at 11:12 PM