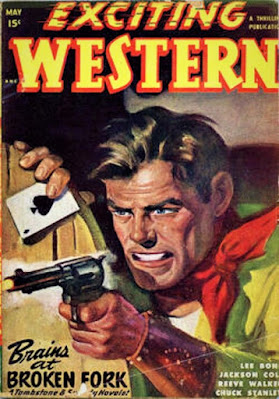 Another Old West poker game gone bad in this excellent cover by Sam Cherry! EXCITING WESTERN was a consistently good Western pulp with several different series running regularly in its pages. In this issue there's a Tombstone and Speedy yarn by the great W.C. Tuttle, plus a Navajo Tom Raine, Arizona Ranger story by house-name Jackson Cole. Also on hand are top-notch pulpsters Wayne D. Overholser, Lee Bond, Gladwell Richardson, Ben Frank, and another house-name, Reeve Walker.
Posted by James Reasoner at 6:00 AM

That really is a great cover.

If you were to suggest a title to sample pulp westerns, which would you suggest?

Probably the most consistent Western pulps were DIME WESTERN and STAR WESTERN, or if your taste runs to the slightly more traditional, WESTERN STORY. Another excellent way to sample pulp Westerns is to pick up copies of three massive anthologies edited by Jon Tuska: SHADOW OF THE LARIAT, STAR WESTERN, and THE BIG BOOK OF ACTION WESTERN STORIES. Inexpensive copies are pretty easy to come by. They reprint a wide variety of authors with the stories coming from an equally wide variety of Western pulps (plus a few non-pulp sources). I also recommend CACTUS AND SAGEBRUSH, edited by Leo Margulies, an anthology of stories drawn from the Western pulps published by the Thrilling Group.

Thanks, I will look for some of those in the usual places.

I grew up in New Mexico, and in the late 60's there was a used bookstore in a rundown part of Albuquerque. It was just an old house in which each room books were stuffed. I was typically there to look for old comics (which they occasionally had) but there was one bedroom that was completely full of pulps. Thousands upon thousands of titles, neatly shelved. I snagged science fiction issues from time to time ($0.20 @) and recall the westerns and mystery titles being there too, but I never gave them much of a glance.

I remember being impressed at how tidily they stood on the shelves, and how easily one could read the titles off the rows of spines.

The store disappeared at some point, but sitting about 3' to my right is a antique console radio I purchased there and restored after hauling it home 3/4 of the way hanging out of the trunk of my Ford Maverick (not much of a freight vehicle).

Oh, but the room full of pulps still sticks in my mind.

One time when I went into a used bookstore in downtown Fort Worth that I frequented during the Sixties, they had several shelves full of pulps. I bought only one of them (an issue of DETECTIVE FICTION WEEKLY) and by the next time I got back there, they were all gone. I've always regretted not getting more of them. Those things haunt us.

Thanks for the references to the compendiums. I received a couple already and will start on Cactus and Sagebrush as soon as I finish the book on Texas Rangers I'm in the middle of.

I've scanned though it (I have to be disciplined though, as I'm not able to read more than one book at a time) and I think I'll enjoy it.

Like the pulps they were collected from, the anthology is quite affordable.