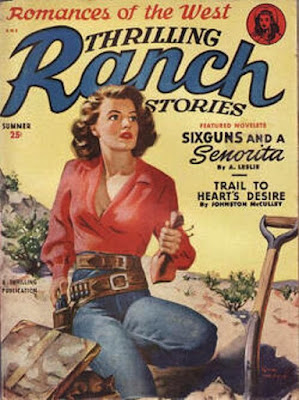 THRILLING RANCH STORIES was the Thrilling Group's second-string Western romance pulp, but you can't really tell that from the covers and authors, which seem to me just as good as those in RANCH ROMANCES. Take the Summer 1950 issue, for example, which sports an excellent Kirk Wilson cover and includes stories by Leslie Scott (as A. Leslie), Johnston McCulley, Chuck Martin, Frank P. Castle, Walt Sheldon, Ben Frank, and Eugene A. Clancy. Those are all solid, prolific Western pulpsters, and one of them (Scott) is a favorite of mine. Sounds like a good issue to me.
Posted by James Reasoner at 6:00 AM

Naive (but serious) questions. Was this pulp (and Ranch Romances) geared toward a female audience? If so, were they successful marketing to women? Did male customers tend to shy away?

Despite having mostly male authors, the Western romance pulps definitely were marketed toward women, especially in their articles and features, which I usually don't mention in these posts. I don't have any idea what the readership percentages were, but I suspect they had a significant number of male readers, too, although I can easily imagine a guy telling the clerk at the newsstand, "I'm just buying this for my wife, she likes it," before he takes the latest issue home and reads it.

Some western pulps, as Rick Hall described it, featured female supporting characters who fainted when trouble erupted. The western romances often featured women who would lift a shotgun and return fire.