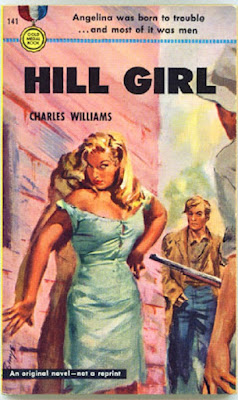 (This post was originally published on March 16, 2005. I started to rewrite it some because so much has changed since then, but in the interest of historical accuracy, I decided to leave it as it was. There'll be some more reruns from the early days of the blog in the coming weeks that I hope will be new to many of you.)

Every time I get a new issue of Steve Lewis's excellent fanzine MYSTERY*FILE in the mail, one of the first things I read is Bill Crider's column "The Gold Medal Corner". And no matter what author Bill is writing about, I think to myself, "I gotta get some of this guy's books off the shelf and read them." But usually I get sidetracked before I get around to it.

Not this time. Bill's latest column is about Charles Williams, and after reading it I actually went to the shelves and pulled down my Charles Williams books. Now, for years I've heard Bill, Ed Gorman, and other people talk about how good Williams' books are. A few years ago, I read one of his Dell First Edition novels, GIRL OUT BACK, and liked it quite a bit. But I never got back to his other books. (That easily sidetracked business I mentioned above.) Until now. I just finished Williams' first novel, HILL GIRL, published by Gold Medal in 1951. Even knowing how people whose opinions I respect feel about his work, I was still surprised by how very, very good it was. Williams wrote very well, mixing vivid, almost lyrical descriptive passages with dialogue that rings absolutely true. Prose that doesn't want to let the reader's eyes stray away from the page. Like the Silverberg book I read a couple of days ago, HILL GIRL is more domestic drama than crime novel, but that doesn't mean there's no suspense in it. The plot unfolds leisurely but builds to a very suspenseful climax. This is a fine novel, and I suspect it's not even one of Williams' best. I hope I'll get around to another of his books soon, instead of waiting several years again.

The success Erskine Caldwell had with his paperback reprints spawned other publishers to mine thus vein. Gold Medal also had a series by William Faulkner’s brother John.

I have read three of Williams' books, and they were all excellent.

You should try: "Scorpion's Reef", "Hell Hath No Fury" and "Dead Calm". THis author truly is one of the best of the lot.
Best,
Tiziano Agnelli

Tiziano,
I haven't read any of those, so I need to hunt them up. I'm sure I'll enjoy them.

I know the last thing you need is another book recommendation but I can't help myself. I rate Williams' "Nothing in Her Way" very highly. (Available in a two-fer from Stark House.)

I've been thinking it was just about time to read something by Williams again. Sounds like that would be a good one.