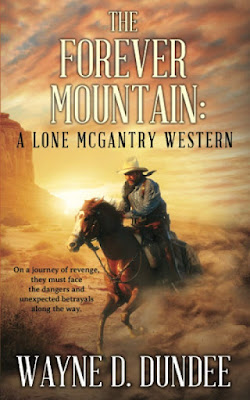 Wayne D. Dundee is one of the best Western writers in the business today. THE FOREVER MOUNTAIN is his third novel featuring former army scout Lone McGantry, who is probably my favorite of Dundee’s series characters. (And let’s face it, Lone McGantry is one of the all-time great Western hero names.)

This one begins with Lone returning to the town where his partner in a small ranch, a former mountain man, lies dying after a raid on their range. The old-timer has hung on to life until Lone can get back, because he wants Lone to take his body up in the Rockies to lay him to rest next to his Indian wife, who died many years earlier. Lone agrees to do that, but once he has fulfilled that promise, he intends to track whoever raided the ranch and caused the old man’s death.

That’s easier said than done, because a young Chinese woman has moved into the ruins of the ranch house. She has troubles of her own and needs to get to the mountains, too, so Lone agrees to let her come along. They pick up another stray along the way, an old saloon swamper, and trouble in the form of hardcases seeking vengeance dogs their heels. Dundee piles up the problems and then adds a neat, unexpected twist near the end.

As always in a Dundee novel, THE FOREVER MOUNTAIN has interesting, well-drawn characters, plenty of action, and a sense of compassion and wry understanding of the human condition that marks all of his work. It’s a thoroughly entertaining yarn, and a sequel is on its way. You can bet I’ll be reading it, too.