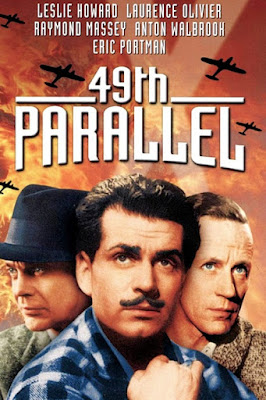 I had never heard of this British war film from 1941 until recently, but it sounded intriguing, so we watched it. 49TH PARALLEL refers to the border between the United States and Canada, and fittingly, since the movie is dedicated to the Canadian war effort, all but a few minutes of the action takes place in Canada.

It begins with a German submarine cruising up into Hudson’s Bay after destroying a Canadian tanker. The captain sends a six-man party ashore to capture a small fishing village so they can raid it for supplies and gasoline. However, the six Germans have barely made it to land when a couple of Canadian coastal patrol planes come along, spot the U-boat, and sink it. That leaves the shore party on their own, and the lieutenant in charge decides they’ll try to cross Canada to Vancouver where they can sneak aboard a Japanese ship. Failing that, they’ll try to reach the United States, which at this point is still officially neutral, and claim asylum.

This is the start of a journey that’s both epic and episodic, courtesy of director Michael Powell, screenwriter Emeric Pressburger, and a fine cast. Eric Portman, as the German lieutenant, is the only character who’s around for the entire movie, but others who come and go include a young Lawrence Olivier, playing a French-Canadian trapper; Leslie Howard as a foppish anthropologist/writer who’s tougher than he looks; and Raymond Massey, who plays an apparent hobo with a few surprises up his sleeve.

This is a propaganda film, no doubt about that, designed to point out the need for the United States to get into the war, but it accomplishes that aim with a considerable amount of subtlety and works just as well as a suspense yarn, with a few touches of humor and pathos along the way. Eric Portman is a great villain, and I was also impressed by Leslie Howard, who I think of mostly as Ashley Wilkes in GONE WITH THE WIND. The location photography is great, including some late shots of Niagara Falls. (And if you’re like me, you can’t even read the name of that place without hearing Moe Howard’s voice.) I really enjoyed 49TH PARALLEL and I’m surprised I never heard of it until recently. It’s an excellent film.

Good film. Glad you enjoyed it. And if you want to knock out the impression of Leslie Howard in GWTW, check out “Pygmalion” (1938) which he co-directed and starred as Henry Higgins.