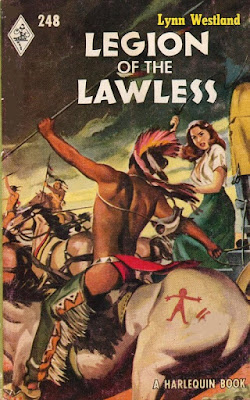 Archie Joscelyn’s writing career lasted for more than fifty years, starting in the pulps in 1921 and continuing until the late Seventies. He wrote hundreds of stories, mostly for the Western pulps, but he’s best remembered for the Western novels (at least two hundred of them) he wrote under his name and the pseudonyms Al Cody, Lynn Westland, and Tex Holt.

I’ve read a number of Joscelyn’s novels and have found him to be a consistently entertaining author of traditional Westerns, with his books ranging from good to excellent, other than the novels from very late in his career, which are not good. Recently, I read his Lynn Westland novel LEGION OF THE LAWLESS, published by Harlequin in 1953, back when Harlequin published other genres besides romances. That’s my copy in the scan.

This novel takes place soon after the Civil War and concerns the Army’s effort to control the bands of former guerrillas who have turned outlaw and are preying on the cattle drives that have started up the trails from Texas to the railhead in Missouri. Captain Phil Lansing is in command of the cavalrymen sent to track down the mysterious leader of the renegades known as Texas Red. Lansing and his men encounter a cattle drive up from the San Saba country in Texas, being led by a beautiful young woman named Joan Ellis. Lansing falls for her, of course, never realizing that her brother is actually the infamous Texas Red, who has promised the herd safe passage through the region controlled by the renegades.

With some writers, that would be enough plot for a book right there, but Joscelyn often has some oddball twist in his tales, and that’s true here. Stalwart cavalry officer Phil Lansing is the nominal protagonist of the book, but it’s none other than Texas Red Ellis, the notorious outlaw his own self, who turns out to be the hero. Like an owlhoot GAME OF THRONES, there are others vying for power among the renegades, plus the threat of Indians, so Joscelyn has plenty going on as the action stampedes toward an epic showdown in an Indian burial ground. (Yes, there is an actual stampede. Of course there is.)

LEGION OF THE LAWLESS isn’t in the top rank of the Joscelyn books I’ve read (DOOMROCK and THE THUNDERING HILLS are the best I’ve encountered so far), but it’s a good solid traditional Western with just enough interesting angles to set it apart. Joscelyn is one of those writers whose prose can range from slightly awkward to vivid and poetic, sometimes on the same page. If he’d been a little more consistent in his writing, I think he would be better remembered than he is. I enjoyed this book and I’m glad I have probably two dozen more of Archie Joscelyn’s novels on my shelves. If you’re a fan of traditional Westerns, he’s worth reading.

Thanks, Mr. Reasoner. Will look for them.

THE THUNDERING HILLS is one of two books featuring Powder Burns, a most likeable character. (The other is - yes, you guessed it - POWDER BURNS). I do enjoy his work, even though it's a little dated. He certainly could spin a warn. We're publishing his POWDER BURNS and MONTANA ABBOTT series in ebook at Piccadilly Publishing.