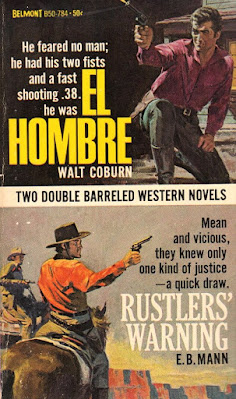 RUSTLER’S WARNING by E.B. Mann is the other half of the Belmont Double Western that includes Walt Coburn’s EL HOMBRE, which I reviewed last week. Like EL HOMBRE, I feel like this short novel probably appeared first in a Western pulp, but I haven’t been able to track down its source. It’s a very entertaining yarn, wherever it first appeared.

The plot is pretty traditional. Young Steve “Snap” Calhoun returns to the ranch where he was raised after being away from home, leading an adventurous life, for several years. He left in the first place because he and his father and his brother fought a bloody war against a gang of rustlers. The wideloopers were wiped out, for the most part, but Steve’s father and brother were killed. Steve leaves the ranch in the capable hands of his foreman.

But now he’s back because rustlers are once again threatening the range, including one of the survivors from the previous clash. Steve knows who’s to blame for the thieving, so he posts a list of their names on a bulletin board in the local town and warns that he’s going to shoot them on sight. This prompts the owlhoots to come after him to try to get him first, which, of course, was exactly what Steve wanted all along.

Mann does throw in a twist that’s fairly predictable, but how everything works out came as a surprise to me, at least in some respects. Traditional it may be, but RUSTLERS’ WARNING is well written and has some great action scenes. I haven’t read much by E.B. Mann, but I’ve enjoyed everything I’ve read and admire his ability to come up with some excellent shootouts. I had a really good time reading this book, and I’m glad I have several more of Mann’s novels on hand.

Posted by James Reasoner at 5:47 AM