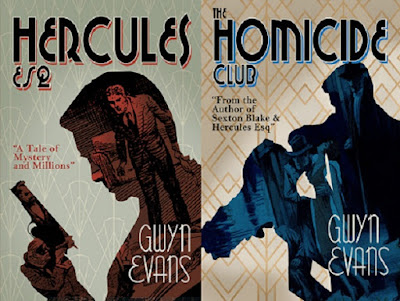 From my friend Steve Holland and the Bear Alley Books website:
“You have heard of a man who, for a wager, offered to sell genuine sovereigns—in the days of sovereigns—at sixpence a time on London Bridge, and not a soul would buy them.”
“Yes,” said Kellaway. “But you don’t surely mean that—that your offer is on a par with that?”

“My question is perfectly genuine,” he answered.

“Would you like a million pounds—and if so, are you prepared to fulfil the necessary conditions?”

Kellaway glanced sharply at his companion’s pale, impassive face. It was as expressionless as the bronze Sphinx itself.

“Of course I could do with a million quid—who couldn’t?” he said. “The point is, who’s going to give it me, and what have I got to do to get it?”

Hercules, Esq. by Gwyn Evans introduces Bill Kellaway, a brash, bright young ex-reporter who had spent years in Africa, returning to England when Egypt regained its sovereignty. When readers first meet Bill he is at his lowest. Penniless, he stands by Cleopatra's Needle on Victoria Embankment, wondering where he can find the money to pay for a cigarette... and then he feels a hand touch his sleeve and a voice asks: "Would you like a million pounds, my friend?"

A born venturer, Kellaway follows the stranger and finds himself at the whim of a group of millionaires who challenge him to complete six tasks that will acquaint him well with the underworld. On condition that his agreement remains a secret and that he makes no attempt to identify his employers, or seek their help if arrested, Kellaway receives the first of his six "labours" in a note attached to a dead body.

Following his first adventure, Kellaway surfaced again in The Homicide Club to face the strange, exclusive Q Club, its membership limited to five, all millionaires and men of vicious character. To relieve the tedium of their wealth, they devise a contest in which each attempts to commit the perfect crime. Symphony Sam becomes their unwilling agent and Bill Kellaway a potential member. Bill joins, but on learning of their criminal activities, determines to wage a secret war against them… 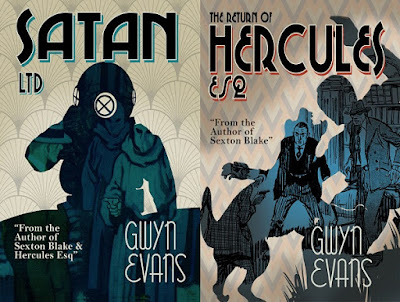 In Satan Ltd., Quentin Steele, the leader of the Shadow Club, is on the verge of collapse through an overstrained heart, when Bill Kellaway finds him and takes him to his rooms. Here he is urged to take the place of Steele as leader of the Club. Partly because of his love of adventure, and partly because of his whole-hearted approval of the aims of the Club, Kellaway agrees. His adventures thereafter make absorbing reading.

And, finally, in The Return of "Hercules, Esq.", Sam Hicks, better known as ‘Symphony Sam’ has turned detective and stars in three thrilling stories—“The Man from Abyssinia,” “The Secret of All Baba's Jars,” and “The Man with the Diamond Mask.” With the aid of ex-Fleet Street newspaperman and eccentric millionaire Bill Kellaway, the pluperfect Henry Henry, and the calmly efficient Miss Candy Lee, he sets up the S.S. Detective Bureau opens its office directly opposite Scotland Yard—to the intense fury of Detective-Inspector Barker, who wants nothing more than to put Sam back in clink.

Created in 1928, the first Bill Kellaway novel, Hercules, Esq., was a great success, serialised in the pages of Union Jack before appearing in hardcovers in both UK and USA. Even as a sequel appeared, the film rights to the debut novel sold for a then-staggering £3,000 —the equivalent of over £130,000 today. Evans reputedly spent his share within a fortnight, hosting some of the brightest, booziest parties Chelsea had ever seen, and not one of his creditors saw a penny from his payout.
About the author 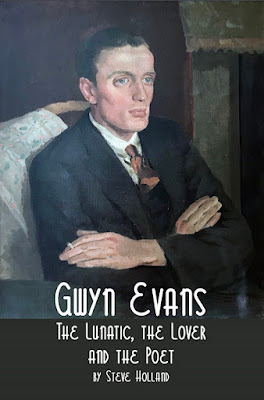 Gwyn Evans (1898-1938) was born in Bangor, North Wales, the son of a Weslyan minister. He turned to writing fiction after a brief career as a journalist in Egypt. He is best known for his tales of Sexton Blake, written in the Golden Age of the detective. His slick, racy style, colourful characters and bizarre plots led one editor to exclaim: “He turned out stuff like a factory, nearly all of it superlatively clever.”

The mercurial Evans lived in the heart of Bohemia and was a heavy smoker and a heavy drinker, which eventually led to his early death at the age of 39.

For much more on Evans, read Gwyn Evans: The Lunatic, the Lover and the Poet, written by Steve Holland, which is now available in a similar 6" x 9" format to the four Bill Kellaway novels, with a portrait of Evans on the front cover. The earlier, larger (A4), heavily illustrated version is also still available from Bear Alley Books.
All of these books are available in the U.S. from Lulu, and you can find them here. I love a good British thriller, and I'm looking forward to reading them.
Posted by James Reasoner at 8:42 AM