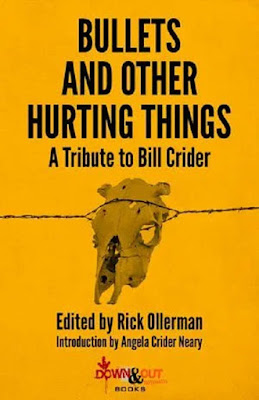 William Kent Krueger (Ordinary Grace, the Cork O’Connor series) brings us a story of romance and grift. Bill Pronzini (the Nameless Detective and Carpenter & Quincannon series) offers a taut episode of a midnight raid. Joe R. Lansdale (The Bottoms, the Hap and Leonard series) tells a tale of two hit men working through their differences. James Sallis (Drive, the Lew Griffin series) shows us how a deadly figure once helped out a man called Bill. Charlaine Harris (the Sookie Stackhouse and Midnight, Texas series) reminds us to be careful of what we wish for. Sara Paretsky (the V.I. Warshawski series) shows how truly deadly a terrible storm can be.

These and fourteen more stories are offered here in the appreciation of our friend and colleague, Bill Crider. These stories were written for him.

I'm so happy this book is coming out. Bill was one of my best friends for more than 40 years, and I still find myself thinking nearly every day, "I need to ask Bill about that" or "I have to tell Bill about that." The story I wrote for this anthology is a sequel to "Comingor", the first story ever published under my name, and my second published story overall, 43 years ago. It's set in the same part of Texas as Bill's Dan Rhodes novels, in the next county to the east, in fact. I also think it's one of the best stories I've written. I'm looking forward to seeing what all the other authors came up with. The book is available for pre-order on the Down & Out Books website and will be showing up in all the other usual places later on.

Sounds great! I know what you mean. I knew Bill from his entry into DAPA-EM in the late '70s, first met him and Judy in person at the Washington Bouchercon in 1980, entertained him at our apartment on a couple of occasions, and took him and Judy on a walking tour from their hotel near Grand Central to the World Trade Center site just before Judy first got sick. Every time I see something about feral hogs or Paris Hilton, or something that makes me think "Texas leads the way," I also think "Bill would have loved this."

Thanks for the tip, James. I'm eagerly awaiting the book now.

I ordered it immediately.

Great news! An absolute must have, that's for sure.