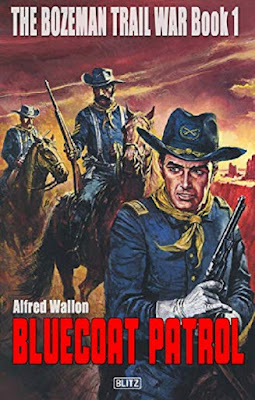 Alfred Wallon is one of the leading Western writers in Germany and has been for many years. Recently some of his novels have begun appearing in English translations, as well, including BLUECOAT PATROL, the first in an epic series of historical Westerns called The Bozeman Trail War.

This novel is set against the background of the long-running clashes between the Plains Indians and the U.S. cavalry prompted by the various discoveries of gold in Dakota Territory and Montana. In BLUECOAT PATROL, a group of cavalrymen led by Captain Frank North and guided by scout Buckskin Charly Weatherford joins a group of prospectors headed to Alder Gulch, Montana. North’s assignment is to protect those goldseekers, but not surprisingly, he encounters trouble not only from the warriors led by chiefs Red Cloud and Dull Knife but also from the very men he’s supposed to protect.

Wallon’s historical research is very solid in this novel, and his characters are well-drawn. Frank North is a stalwart hero and Buckskin Charly a top-notch sidekick. The translation gives the prose a voice that’s not quite what we’re used to in traditional Western novels, but at the same time, it works just fine and the story moves along well. Not everything is resolved by the end of BLUECOAT PATROL, but that’s not surprising considering that the series continues for a number of other volumes. It actually reminds me a bit of the old Easy Company series published by Jove under the house-name John Wesley Howard, although it’s more realistic. If you enjoy historically based Western novels or cavalry yarns, check out BLUECOAT PATROL. I enjoyed it.

Sounds interesting but boy you have overfilled my reading list. Realized I can’t recall reading any E B Mann so ordered a couple. On number 2 of the Brazos/Benedict series much better than the first). Looking to revisit Archie Joselyn. Too many books, too little time.

The only German western writer I ever read was Karl May.

I haven't read Karl May, and I probably should. The only German Western writers I've read were English translations of Alfred Wallon and Thomas Jeier.


Good review. I wish Alfred Wallon the very best with his books!

Talkin' about European Western witers you should try:

Charles Sealsfield, was the pseudonym of Austrian-American journalist Carl (or Karl) Anton Postl (3 March 1793 – 26 May 1864), an advocate for a German democracy. He lived in the United States from 1822 to 1826, and then again in 1828/1829. During a final stay from 1853 to 1858 he became a US citizen. Sealsfield is best known for his German-language Romantic novels with American backgrounds, and also wrote travelogues. He returned to Europe about 1829, living in Paris and London before settling in Switzerland in 1832, where he resided for most of the rest of his life.

Friedrich Gerstäcker (May 10, 1816 in Hamburg – May 31, 1872 in Braunschweig) was a German traveler and novelist.
After being apprenticed to a commercial house, he learned farming in Saxony. In 1837, however, just younger than 21 and having imbibed from Robinson Crusoe a taste for adventure, he went to America and wandered over a large part of the United States, supporting himself by whatever work came to hand. He became fireman on a steamboat, deck hand, farmer, silversmith, and merchant. After wandering through most of the United States, spending some time as a hunter and trapper in the Indian territory, and in 1842 keeping a hotel at Point Coupée, Louisiana, he returned to Germany six adventurous years later in 1843.

I'd heard vaguely of Sealsfield, but not of Gerstacker. I'll check them out. Thanks!

Hi, James. Yes, Jeffrey M. Wallmann and I had two American-German collaborations published by Doubleday a long time ago. In the meantime I am more into what you would call Northern Romances with strong women in Alaska and the Yukon, some of them set in the Gold Rush years. I wrote quite a few westerns and non fiction books but straight westerns don't sell as much as they used to. Before Corona my wife and I spent three to four months a year researching and writing in the US. - I know Alfred Wallon very well, he is very enthusiastic about historical westerns and I like his work very much.

We need to do a Six-Gun Justice Podcast episode on American Westerns written by European and Scandinavian authors. Just wrapped up a Speed Listen on Westerns from Australia's Cleveland Publishing, which led me to read the first Altus Press reprint volume of the Brazos & Benidict series. Not a lot of depth in this first one, but it was well written with some good lines ('night fell like a club'), really moved along, and the characters were fun if a bit cartoonish. I'll certainly give the next in the series a try. I'll also have to track down the series you talk about in this post...