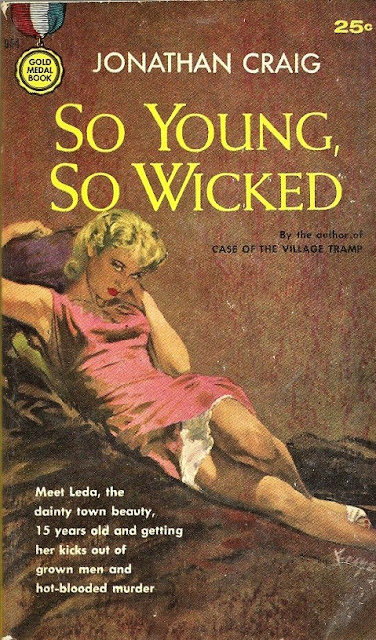 Jonathan Craig (whose real name was Frank Smith) is one of those writers whose work I’ve seen around for many years, but I’ve read very little by him. That may be something I have to remedy, because I recently read his 1957 Gold Medal novel SO YOUNG, SO WICKED and really liked it, although “liked” is kind of an odd word to use about a book where the protagonist is a thoroughly despicable human being.

You see, Steve Garrity is a hitman for the mob, one who was forced into the job out of self-preservation but who has discovered it doesn’t bother him in the least to kill people, even innocents. Even Garrity, though, is a little taken aback when he gets his latest assignment: to kill a beautiful 15-year-old girl in a small town in upstate New York. He doesn’t know why the mob wants her dead, but his own life is on the line if he doesn’t carry out the assignment. Complicating matters even more is the fact that her death has to look like an accident, and Garrity has only a few days to complete the job. 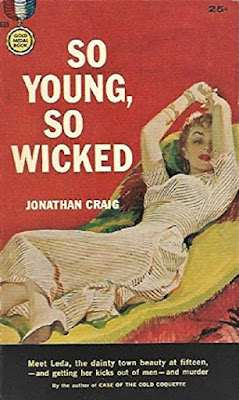 Craig manages to pull off something very tricky: making the reader sympathize with about as cold-blooded a protagonist as I’ve ever encountered in a novel. Every time it looks like a crack might be developing in Garrity’s armor, it disappears in his calm contemplation of the best way to murder his target. Naturally, since this is a noir novel, things don’t go as planned, especially after Garrity discovers that 15-year-old Leda is living with her aunt, a beautiful redhead in her twenties. Craig piles several other obstacles in his way, until the reader has to wonder if Garrity will have any chance to carry out his grim mission.

Then everything gets upended in a couple of neat twists that really had me flipping the pages to see how everything was going to work out. 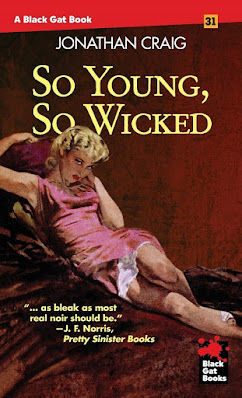 I’ve never read extensively in the hitman subgenre in hardboiled and noir fiction. I’ve read and enjoyed most of Lawrence Block’s Keller yarns, and I liked the one Quarry novel I read by Max Allan Collins and need to read more of that series. While Craig’s writing isn’t as smooth as Block’s or Collins’, SO YOUNG, SO WICKED is still right up in their league as a hitman novel. It’s well-paced and a fine example of pure storytelling. Black Gat Books is reprinting it soon. That edition is up for pre-order, and if you’re a fan of noir novels, it’s well worth reading.
Posted by James Reasoner at 9:34 AM

Craig was best known for his Sixth Precinct Series of Ed McBain-ish police procedurals set in Greenwich Village, with Pete Selby being the main protagonist.

SO YOUNG, SO WICKED is definitely going to be added to my shopping list.