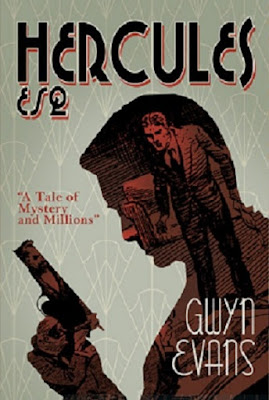 I’d never heard of Gwyn Evans until recently. He was a prolific author of some highly regarded stories in the very long-running Sexton Blake series, as well as writing novels about his own characters. My friend Steve Holland has published a biography of Evans and reprinted the four volumes of his Bill Kellaway series. I recently read the first one, HERCULES ESQ.

Bill Kellaway is a down-on-his-luck journalist, almost broke, sitting on an embankment in London, when he’s approached by a stranger offering him a million pounds for some sort of secretive mission. Although Bill isn’t really suicidal, this opening reminded me a little of the first chapter of THE LIVING SHADOW, the first novel from the long-running pulp, written by Walter B. Gibson. HERCULES ESQ. isn’t a whirlwind of crime-fighting like those early Shadow novels, though. Instead, it’s a much more light-hearted romp, as Bill finds himself trying to complete a series of difficult tasks assigned to him by the Secret Six, a group of bored millionaires who get their fun out of trying to give Bill impossible chores and making side bets on whether or not he can complete them. (The Labors of Hercules being where this novel gets its title, of course.) There’s also a beautiful, mysterious young woman involved, but is she working with Bill or against him?

Although there’s some criminous stuff going on and Bill often finds himself vying against or working with various lawbreakers, the stakes are never really life and death in this book. There are no murders to solve. Which works against it a little if you’re expecting more of a thriller. There is some slam-bang action, though, as well as a smart, really likable protagonist and a lot of really clever plot twists, but what really makes HERCULES ESQ. work is Evans’s style, which is consistently breezy, fast-paced, and funny. The word “blithe” could have been invented for this book. I really enjoyed it, even though it wasn’t quite what I expected. I have the other three books in the series, as well as the Evans bio, and I look forward to reading them. All of them are available here.

I also have a collection of Sexton Blake stories by him, too. Knowing a little about Evans’s background, one of the funniest bits in this book involves Bill’s indispensible valet/assistant and his reading habits.