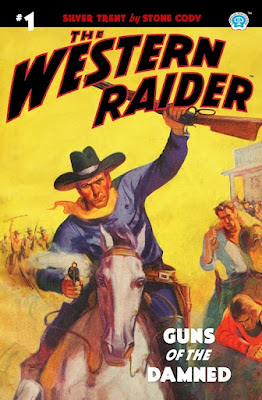 THE WESTERN RAIDER was a short-lived Western hero pulp that ran for three issues in 1938 and ’39. It featured the adventures of Silver Trent, a heroic outlaw sometimes known as the Hawk of the Sierras or the Rio Robin Hood. And like the Robin Hood of legend, Silver Trent has a band of colorful followers and fellow adventurers who ride with him, known as Hell’s Hawks. After the three short novels that were published in THE WESTERN RAIDER, Silver Trent returned in ten short stories and novelettes that appeared in STAR WESTERN from 1939 through 1942. I recently read the first Silver Trent novel, “Guns of the Damned”, from the August/September 1938 issue of THE WESTERN RAIDER.

This yarn opens with two Texas cowboys who have crossed the border into Mexico to look for a friend of theirs who disappeared. The friend was trying to find out who’s behind a series of rustling raids, and he’s sent word back that he suspects an outlaw named Silver Trent. His two pards who are searching for him are about to get gun-trapped in a cantina when a mysterious stranger rescues them. No bonus points for guessing that the mysterious stranger turns out to be Silver Trent his own self, and he’s no rustler. In fact, his mortal enemy, a rich but evil Mexican rancher known as El Diablo, is actually behind the raids across the border into Texas, and the two cowpokes are drawn into Silver Trent’s on-going war against El Diablo.

That’s about as complicated as the plot of this novel gets. It’s basically just a series of shootouts, captures, escapes, and epic battles, pausing occasionally to introduce more supporting characters from Silver’s friends, which include a priest with a hard right hook, a melancholy Mexican gunman tortured by religious guilt, a drunken doctor, a fast-gun gambler, an old geezer, and, of course, a beautiful girl.

Silver Trent himself is a bigger-than-life character, the sort of mythical figure who can out-shoot, out-fight, and out-ride anybody that shows up so often in Frederick Faust’s work. In fact, he reminds me quite a bit of Faust’s Silvertip, and while I have no way of knowing, it wouldn’t surprise me if the similarity in names wasn’t entirely a coincidence. Silver needs to be as competent as he is, because he’s evenly matched with El Diablo, about as despicable a villain as I’ve run across in a pulp Western.

Keeping everything moving at a breakneck pace is author Stone Cody, who was really Thomas Mount, a bit of a colorful character himself who I wrote about a while back in my review of his novel THE GUN WITH THE WAITING NOTCH. I really enjoy Mount’s over-the-top prose, such as this bit from late in the book:

The battle cry of Silver’s men!

In brazen-clanging Spanish and hard-bitten American—a sound like a trumpet call, that the desert knew and quivered to, that the mountains had flung back triumphantly in a hundred slashing whirling fights, that echoed still, fearfully, in the dreams of men who listened to it and lived to tell the tale.

“To Silver! Hell’s Hawks for Trent!” And now the sudden, staccato thunder of the guns!

Great literature, maybe it ain’t. But great literature generally doesn’t make me literally pump a fist in the air like I did when I read that line about the thunder of the guns. And that goes a long way toward explaining why I write like I do.

Altus Press/Steeger Books has reprinted the entire Silver Trent series, and I own all six volumes. I’ll be reading the rest of them soon. If you love Western pulp adventure as much as I do, I give them a very high recommendation. I love this stuff.