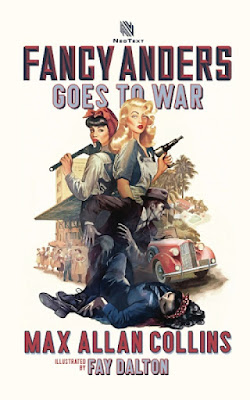 Fancy Anders is a rich, beautiful blond socialite during World War II. She worked as a secretary in her father’s successful private detective business, and when he’s called back to active duty, she takes over the agency. Not as a detective, mind you, but simply somebody to refer potential clients to other agencies and keep the business existing in name only.

Now really, what rich, beautiful blond socialite is going to be satisfied with a set-up like that? Especially when a young woman who works in an aircraft plant dies under suspicious circumstances, and the man who owns the plant is an old friend of Fancy’s family? Naturally, Fancy decides to go undercover and join the millions of women who have entered the workforce with most of the men off at war. She’s determined to find out if the young woman’s death was an accident, as it appears at first . . . or murder.

FANCY ANDERS GOES TO WAR: WHO KILLED ROSIE THE RIVETER? is a book that seems to have been designed with me as the target audience. And since Max Allan Collins is one of the modern masters of the historical mystery, it doesn’t disappoint in the slightest. This is a highly entertaining novel, with a fast pace, a suitably twisty plot, and a great protagonist in Fancy Anders. The cover and illustrations by Fay Dalton just make it that much more appealing. I had a wonderful time reading this book and give it a high recommendation. And I’m happy to know that there are at least two more Fancy Anders tales in the works, because I’m looking forward to reading them, too.