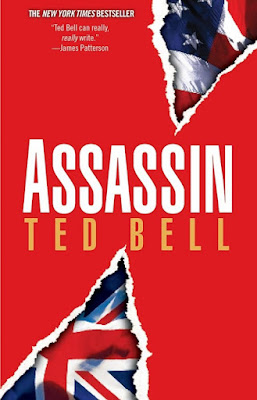 ASSASSIN is the second book in Ted Bell’s series about Lord Alexander Hawke, British nobleman, billionaire businessman, and freelance secret agent for the British and American governments. These books are deliberate throwbacks to the more outrageous espionage novels of the Sixties, with larger-than-life heroes and colorful, eccentric villains bent on ruling and/or destroying the world. Bell has updated that whole scenario for a post-9/11 world, of course, and the bad guys in this book are Islamic terrorists who are a. systematically assassinating American ambassadors and their families worldwide, and b. working on a concurrent plot to launch a devastating attack against the United States on American soil. Obviously, the only man who can deal with this terrible danger is Alex Hawke, even though a mysterious enemy from his past is seeking vengeance on him at the same time.

There’s a lot to like about this book. Hawke and his friends and allies are an appealing bunch, and the last 150 pages are filled with action and very suspenseful. Before that, though, the plot meanders around quite a bit and seems to take a long time to develop. There are nice set pieces all the way through the novel but too many of them have long stretches between them where nothing much happens, giving the book a padded feeling, something I didn’t think happened in the first book. Maybe I just read it too soon after HAWKE, the initial entry in the series.

Overall, I enjoyed ASSASSIN enough that I’ll definitely continue to read the series, but I’ll probably let more time go by before I tackle the third book, PIRATE.

(Update: I lied. I never went on with the series and read the third book. Or maybe I just haven't gotten to it yet. Yeah, that's it. I'll read it one of these days, once I've retired and have more time to read long books. You believe that, don't you?)