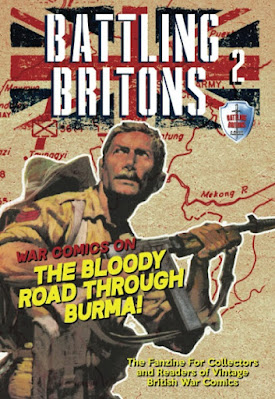 Justin Marriott is back with BATTLING BRITONS 2, the fine journal he edits and publishes devoted to British war comics, which is good news indeed for comics fans.

The cover features by Justin Marriott and Paul Trimble focus on war comics set in Burma, but as always, there’s a wide variety of subject matter in this issue. Jim O’Brien takes a look at stories set during the conflict between the U.K. and Argentina over the Falkland Islands, and Justin Marriott contributes an article about Hellman of Hammer Force, one of the best-known German protagonists in war comics, along with an overview of other “good Germans” who starred in their own stories. Two real highlights are an article/interview with Gary Dobbs, one of the current COMMANDO scripters, and an interview with Keith Richardson and Oliver Pickles, the editors of a series of reprints called the Treasury of British Comics (published by Rebellion, the company that currently holds the rights to a lot of great material).

Dobbs is also the author of an excellent article about “Charley’s War”, regarded by many as the best British war comic ever published. I haven’t read that one, and since the whole run by the original writer and artist (Pat Mills and Joe Colquhoun) has been reprinted, I really ought to. But there are also plenty of other reviews and features that make me want to search for reprints or see if digital editions are available. As always, this issue of BATTLING BRITONS is going to make me add to my collection!

I wrote another column in this one in which I have short reviews of a dozen issues of COMMANDO, the long-running (since 1961!) digest comic for which several of my friends have written scripts over the years. Unfortunately, this is my final column in BATTLING BRITONS, as the press of both writing and editorial work has become too time-consuming to keep it up. I’ve really enjoyed working on these and plan to continue reading COMMANDO on a regular basis (all the new editions are available as ebooks on Amazon, which sure makes it easier for those of us stateside), as well as the reprints I’ve already picked up. And I look forward to forthcoming editions of BATTLING BRITONS. This issue and the previous ones all get very high recommendations from me.