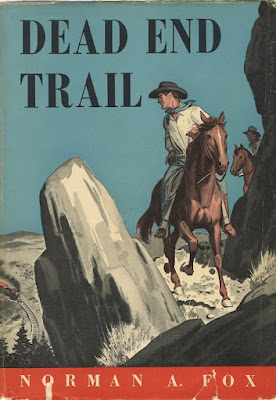 Norman A. Fox was a prolific, consistently good Western author in both the pulps and the novel market for more than twenty years, from the late Thirties until his death in 1960. He published 31 novels during that time, as well as more than 400 stories, all of them Westerns except for one detective yarn. His most successful decade was probably the Fifties, when several of his novels were made into movies.

DEAD END TRAIL, published in hardcover by Dodd, Mead in 1944 and reprinted several times in paperback, is the first of four novels featuring range detectives Rowdy Dow and Stumpy Grampis, Fox’s only series characters. Actually, in this one the duo start out as reformed outlaws. Rowdy has received a pardon for his crimes because he heroically risked his life to warn a whole valley full of settlers when a dam burst, so they could escape before the resulting flood washed them away. As the novel opens, the two friends are on the drift in Montana, but they soon find themselves in trouble when a U.S. marshal recruits them to help him on a mysterious errand: he wants Rowdy and Stumpy to deliver a china figurine of a rearing stallion to a rancher in Latigo Basin. This rouses Rowdy’s curiosity enough for him to go along with the plan.

Well, you know things are bound to get a lot more complicated than that. Turns out the china figurine is the key to recovering a fortune in hidden loot. But that’s not all. There’s a land swindle going on in Latigo Basin, plus a legendary outlaw who’s escaped from prison (Butch Rafferty . . . Hmm, wonder who he’s based on?), a dimwitted giant who can repeat, verbatim, anything he’s ever been told, a county fair, a hot air balloon, some rustling, and oh, yeah, a pretty girl. Fox mixes it all together into a pretty complicated plot that changes direction several times. The story sprawls around enough that I wondered if Fox came up with it by combining a couple of his pulp stories, but that’s pure speculation on my part.

Whatever its origins, DEAD END TRAIL is a solid, entertaining traditional Western. The pace is a little leisurely and there’s quite a bit of droll humor, but Fox can bring the hardboiled action when he needs to. I don’t think it’s a coincidence that Rowdy and Stumpy remind me quite a bit of Roy Rogers and Gabby Hayes, but again, that’s pure speculation on my part. What I do know is that I enjoyed this novel, and if you’re a fan of traditional Westerns, I think there’s a good chance you will, too. The other Rowdy Dow and Stumpy Grampis novels are THE DEVIL'S SADDLE, THE FEATHERED SOMBRERO, and THE PHANTOM SPUR. With titles like those, you can bet there's a pretty good chance I'll be reading them sooner or later. 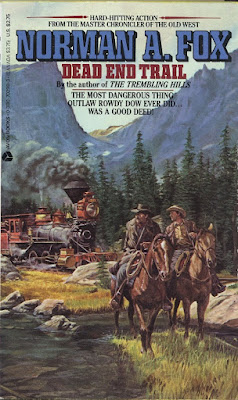 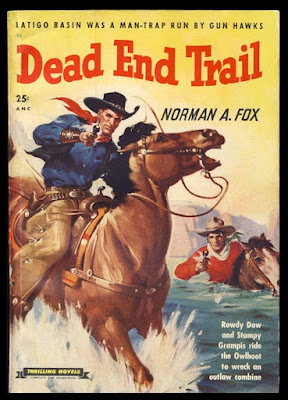 Email ThisBlogThis!Share to TwitterShare to FacebookShare to Pinterest
Labels: Norman A. Fox, Westerns

I remember reading this several years ago and enjoying it. Fox is a fine writer as were most of his contemporaries of the time.