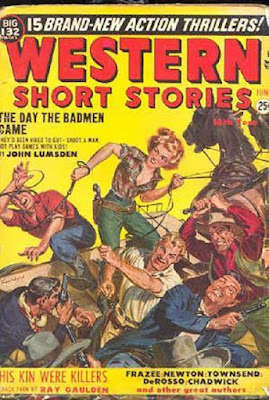 With all the action on this cover, you know it has to be the work of Norman Saunders. Seven guys, a beautiful girl with a quirt and a six-gun, and two stampeding horses. I'm not sure anybody but Saunders could have packed that much into a cover and made it work. As for the authors inside this issue of WESTERN SHORT STORIES, it's a fine group: H.A. DeRosso, D.B. Newton, Joseph Chadwick, Stephen Payne, Ray Gaulden, Joseph Payne Brennan, Ray Townsend, Roger Dee (Roger D. Aycock, probably better remembered for his science fiction), and a number of lesser-known authors including John Lumsden, Clem Yager, Jay Arrow, and house-name Ken Jason. Steve Frazee is listed on the cover but doesn't actually have a story in this issue, according to the Fictonmags Index.
Posted by James Reasoner at 6:30 AM

I think I need to read some of Brennan's western writing. Every see or read any issues of his little magazine MACABRE?

I never saw MACABRE, and I don't believe I've ever read anything by Brennan, horror or Western. Probably should remedy that.

My first was his vignette "Levitation" (first in, I believe, his Arkham collection, reprinted in Ballantine's early horror line, NINE HORRORS AND A DREAM). I was very young, but I'm not sure I've read a better story from him since, albeit some have been very good indeed. His poetry in leftist magazines rather surprised me, as well, in recent years.

There's a chapbook collection of some of his stories called SCREAM AT MIDNIGHT available on the Internet Archive. I've downloaded it and will get to it relatively soon, I hope. If I like his work, there are several other collections available as ebooks on Amazon, including NINE HORRORS AND A DREAM. I'm tempted to just go ahead and get them.

Interesting...self-published by Brennan, under the same rubric as MACABRE the magazine. I don't believe I've ever read the stories collected here: http://www.isfdb.org/cgi-bin/pl.cgi?29309

NINE HORRORS AND A DREAM includes several of his best-known stories.