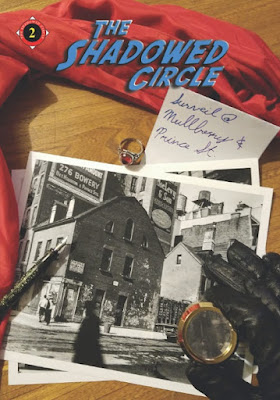 The first issue of THE SHADOWED CIRCLE, a new journal devoted to the iconic character The Shadow in all his forms, was excellent. The second issue is even better.

This volume kicks off with a look at HITLER’S ASTROLOGER, a 1988 graphic novel written by Denny O’Neil and drawn by Mike Kaluta, two of the top comics creators from the Seventies and Eighties. I remember very well when this book came out and would have sworn that I’d read it, but after reading this fine review by Malcolm Deeley, I’m not sure I have. Now I have to find a copy and read it, for sure.

Shadow expert and author Will Murray contributes an excellent essay about how he and Anthony Tollin decided which Shadow novels to pair up in their long-running series of Sanctum reprints. As always, it’s an interesting, well-written piece. I’ll read anything Will Murray wants to write about The Shadow.

In a lengthy article, editor Steve Donoso uses vintage photographs by Berenice Abbott to illustrate the haunts of 1930s New York where so many of The Shadow’s exploits took place. This is fascinating stuff. I always enjoy looks back into history such as this.

In another highlight, Todd Severin and Keith Holt tackle the history of The Shadow as a pulp character, beginning with his murky origins in radio. Long-time Shadow fans have read this story before, but even so, Severin and Holt present it in such clear, concise, entertaining prose that I thoroughly enjoyed reading it. Newer fans can learn a lot from this series, and I look forward to reading future installments of it.

There’s also a review by Steve Donoso of Will Murray’s MASTER OF MYSTERY, a book collecting a number of articles and interviews pertaining to The Shadow’s authors, editors, and illustrators, plus articles about The Shadow’s connection to the Explorer’s Club (by Julian Puga) and military heraldry (by Tim King). These round out the issue very nicely, along with art by Cristian Diaz, Alvaro Fernandois, Steve Novak, John Sies, Santiago Bojorquez, Luke Forster, Mike Hammen, David Hitchcock, and the late, legendary Frank Hamilton, whose fantastic work graced so many of the pulp fanzines I’ve read over the past four decades. Kudos as well to deputy editor Rebecca Robinson and website and Facebook page director Sam Oatley. As editor Donoso says, it takes a lot of people to produce something this good, and everyone involved deserves the thanks of Shadow fans everywhere.

Speaking of the Facebook page, it can be found at facebook.com/burbank1931. You can contact the journal at theshadowedcircle@yahoo.com, and the website is www.theshadowedcircle.com . Print and digital subscriptions are available, and you can also buy single copies on Amazon. I’ve been reading the adventures of The Shadow for close to 60 years now, and I’m really enjoying this look at the character. Highly recommended.