All of the Marvels - Douglas Wolk 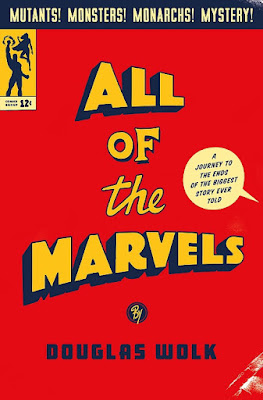 Douglas Wolk had a really great idea for a book: read all of the superhero comics published by Marvel since FANTASTIC FOUR #1 was published in 1961 (approximately 27,000 comic books through 2017) and then write an overview of them, considering them all to form one single, self-contained story, the largest work of fiction ever published. It’s exactly the sort of thing that a long-time (since Christmas Day, 1963) Marvel Comics fan like me would find fascinating.

The execution of that really great idea? Well, that’s something else again.

Good news first. ALL OF THE MARVELS is about 90% of a great book. When he’s actually writing about the comics, Wolk is top-notch, summarizing them well and doing an excellent job of fitting everything together. He fills in the historical background well and is affectionate and even-handed in his treatment of the creators of those comics. It doesn’t hurt that he devotes an entire chapter, and a long one, at that, to MASTER OF KUNG FU, my favorite comic from the Seventies. He gives a lot of love to FANTASTIC FOUR, my all-time favorite comic book, and also to THE AMAZING SPIDER-MAN, which is also very high on my list. Best of all, when he’s writing about the Sixties and Seventies, the book makes me feel like I’m there again, walking across the highway to Lester’s Drugstore to pick up the new issues every week.

Unfortunately, before he gets to that point, Wolk spends a lot of time early on lecturing the reader and making it clear that he dislikes long-time comics fans (you know, the ones who plunked down their nickels and dimes and quarters every week for years so that there would still be a Marvel Comics for him to write about) and considers any of us who don’t care for Marvel’s current comics to be horrible people. He comes across as smug, arrogant, and very morally superior to anybody who disagrees with him.

Luckily, as I said, most of this is very early on. If you’re a long-time fan and/or have no interest in what Marvel is publishing these days, I’d advise skimming the first two chapters and skipping Chapter 3 completely. Heck, if you’re a long-time fan, you can probably just start with Chapter 4, which focuses on, appropriately enough, the Fantastic Four. There are a few brief shots at older fans later on, but they’re easy enough to ignore.

Don’t get me wrong. Overall, I enjoyed ALL OF THE MARVELS quite a bit and consider it well worth reading. Yeah, there were a few times when I felt like throwing the book against the wall, but mostly I raced through it, flipping the pages eagerly, having a great time reliving some fifty- and sixty-year-old memories. Just know what you’re getting into if you were there at or near the beginning, like I was.

Got it and I'm looking forward to it.

James,
I’ve been reading your blog for more than 15 years and I’m certain this is first time I’ve read a genuinely negative comment about an author here.
You have proven yourself to be such an easy-going, tolerant fellow that all I can think is that this guy must have produced a few chapters that are Truly Profoundly Annoying.
Yet instead of focusing on the negative, you found what was good in the book and shouted it out.
You wear a white hat, James.

Seems like one to look for at the library.

I usually get one Christmas present a year, and this year, this one was it. Am looking forward to reading it, but thanks for the warnings. I started reading Marvel comics back in 1964 or 1965 before gradually drifting away, but on occasion I still sample the recent stuff. I marvel at the artwork and coloring, the stories though seem to be rehash of rehash.

Snark at the Old-Time Comics Fans sounds very much like the stereotypical Comics Fan. Or perhaps, any subcultural fan. Sigh.

It is a good notion, though a Hell of a lot of reading to need to do (and if one wasn't already a stone fan, an expensive proposition in at least one way).

Yours for horror comics being the best, and the best superheroes having a horror aspect to them...