A Guide to the Good Life: The Ancient Art of Stoic Joy - William B. Irvine 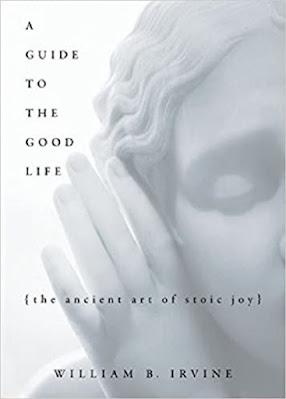 For the last several years, I’ve had a growing interest in Stoic philosophy (upper-case S, by the way; the generally accepted definition of “stoic” isn’t really what Stoic philosophy is about). Like a lot of writers, I battle off-and-on with depression and anxiety, and from what I’d read about the Stoics, they seemed to have some ideas that might prove helpful in dealing with such problems. Recently I decided to delve a little deeper into the subject, so I picked up what appears to be a well-regarded book about it, A GUIDE TO THE GOOD LIFE: THE ANCIENT ART OF STOIC JOY by William B. Irvine.

Now, as you know, I’m a fiction guy. Most of the non-fiction I read is about books and/or writers. Normally, reading a book about philosophical ideas would make my eyes (and my brain) glaze over. But A GUIDE TO THE GOOD LIFE is surprisingly readable, probably because Irvine’s prose is clear and concise, without a lot of academic jargon, and a thread of self-deprecating humor runs all through the book. He starts with a good historical background and biographical sketches of the ancient Roman philosophers who developed Stoicism from its Greek origins, then lays out the central principles of it. That’s all excellent, but the following section that goes into detail about applying Stoicism to obstacles encountered in modern life is probably the most valuable.

I won’t even attempt to go into all of that here. A lot of it strikes me as being just common sense, and I was a little surprised to discover that some of the things I already try to do go right along with Stoicism. But I think that reading this book and pondering more about it has helped me already to deal with adversity. Maybe not much, mind you; it’s certainly no magic bullet. But hey, any ideas that help you get along in this crazy day and age are worth something, I think.

I don’t agree with everything in Irvine’s book, but I’m intrigued enough that I’ve ordered a couple more volumes about Stoicism and plan to read them soon. And I have to admit, I also like the fact that this may well be the only blog on the Internet where you can read reviews of Tom Roan’s THE DRAGON STRIKES BACK and a book on Stoic philosophy in less than a week’s time.

I have my bouts with the "black dog" (as Churchill called his depression) as well and have heard things about the Stoics being helpful in this. I haven't dived in yet but your post makes me want to check it out now.

And I am proud to read the only blog that features pulp and Stoicism!

Glad you found something useful. I've been meaning to read that book, myself.

I may have to give this one a try. Thanks for the tip.

I, too, have started reading about the Stoics. Last year, I read the Daily Stoic ebook, 366 daily meditations on various Stoic philosophers. As this year dawned, I decided to re-read the book. Now, I'm moving on to Meditations and other Stoic writings. Will have to add this one to the list.