The Gun With the Waiting Notch - Stone Cody (Thomas Mount) 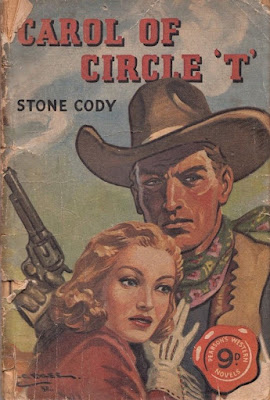 Jed Carson is a drifting cowpoke who comes to the Texas border country on a mission: He’s searching for the man who murdered his father. He carries an ivory-handled Colt with a notch already carved in the butt, just waiting for Jed to catch up to the killer and dispense hot-lead justice.

But no sooner does Jed mosey onto this range than he finds himself rescuing a rancher’s beautiful daughter from a menacing gunman. He quickly discovers that this region is plagued by rustlers and decides to help the girl and her crippled father fight off the outlaws. But is it possible that this might dovetail nicely with Jed’s original mission and afford him the opportunity to finally settle the score with his father’s murderer after years of searching? I think you probably know the answer to that question just as well as I do.

Predictable or not, THE GUN WITH THE WAITING NOTCH is a very entertaining Western. The author (more about him later) spends about a fourth of the book setting up the various characters and factions warring along the border and giving us the hero’s back-story, and then the rustlers raid the Circle T round-up and set off a series of furious action scenes that continue almost without pause to the end of the book. Battle follows chase follows shoot-out with only very short respites for the characters to catch their breath. Some of the clashes reach almost epic proportions before a very satisfying final showdown and some last-minute revelations worthy of Walt Coburn. There’s nothing here you haven’t read many times before, but it’s very well done and I had a great time reading it.

THE GUN WITH THE WAITING NOTCH was published in September 1933 by William Morrow, had a cheap hardback reprint from A.L. Burt later that year, and was reprinted in England by Cassell in 1934 under the title CAROL OF CIRCLE T. It was reprinted, again in England, by Ward Lock in 1952 under that same title, and then in 1958, Jefferson House brought it out in hardback under its original as part of its Triple-A Western Classics line, with an introduction by Erle Stanley Gardner. That edition carries a 1938 original copyright date, but that’s incorrect. The Morrow edition was definitely published in September 1933. Kirkus reviewed it the same month and said, “A new Western writer, and a promising one. This has all the proper ingredients, well blended. Not particularly original in plot, but the telling has punch.” Yeah, pretty much what I said.

The by-line on this novel is Stone Cody, but behind that pseudonym is a pretty interesting Western novelist and pulpster. “Stone Cody” was really Thomas Ernest Mount (1898-1976), a former advertising man who, according to the copyright registration, lived in Woodstock, New York, at the time this book came out. As far as I’ve been able to determine, THE GUN WITH THE WAITING NOTCH is Mount’s second novel. His first, MUSTANG TRAIL, was published earlier in 1933 under the name “Oliver King”, a pseudonym he used for some of his later pulp stories. I don’t have a copy of MUSTANG TRAIL, but Kirkus said of it, “Lots of shooting and a bit of humor in a Western which departs somewhat from the conventional pattern. Card sharping and horse thieving, etc.” The next year, 1934, saw him begin a prolific career of writing for the Western pulps that lasted twenty years. He used both King and Cody pseudonyms and published several more novels under the Cody name, but it appears they were all reprints of the Five Mavericks pulp novels that were published originally under the name Kent Thorn. (The Mavericks novels are still in print from Altus Press/Steeger Books, by the way.)

Mount’s story has more to it than his Western writing, though. He was working at an advertising agency in New York in 1923 when he met a young copywriter named Laura Zemetkin. They moved in together and lived as husband and wife for several years but never actually married because Mount was already married to somebody else. After their relationship ended, Laura married publishing executive Thayer Hobson in 1930. Hobson bought the company he worked for, William Morrow, and decided to write a Western novel that his newly-bought company would publish. He came up with the characters and plot, and he and Laura collaborated on the book itself, writing alternating chapters, before Hobson edited the final draft. That book was OUTLAWS THREE, the first book in the very successful Powder Valley series that would run for thirty years, written by various Western authors under the house-name Peter Field. Thayer and Laura Hobson wrote the first two or three novels in the series before turning it over to other authors. They divorced in 1935.

Laura Hobson published her first short story in 1932 under the name Laura Mount. After her divorce from Thayer Hobson, she and Thomas Mount became friends again, although not in a romantic way. There are some indications that Laura Hobson may have collaborated with Mount on some of his Western stories, but at this late date we’ll probably never know for sure about that. However, we do know that under the name Laura Z. Hobson, she went on to become a bestselling novelist, with her most famous work being the novel GENTLEMAN’S AGREEMENT. I have no idea whether her early relationship with Thomas Mount had anything to do with her becoming a writer, but I like to think that it did.

THE GUN WITH THE WAITING NOTCH is the second novel by Thomas Mount that I’ve read. Many years ago, I read a hardback reprint of FIVE AGAINST THE LAW, the first of the Five Mavericks novels, but I don’t recall anything about it except that I enjoyed it. I liked this one enough that I want to read more by Thomas Mount. If you’re a fan of action-packed traditional Westerns, I give THE GUN WITH THE WAITING NOTCH a high recommendation.

(Note: My copy of this is just a plain brown hardcover with no dust jacket, and I can’t find any images of either edition on-line, so I’m using an image I found of one of the British reprints. The title and cover make the book look like a Western romance, which it definitely isn't.)