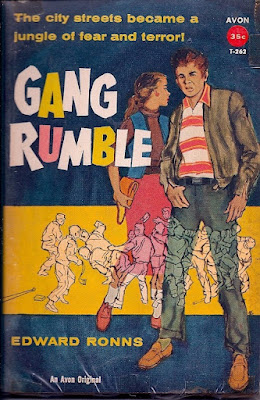 Despite the title and cover painting, GANG RUMBLE by Edward Ronns (Edward S. Aarons) isn’t really a juvenile delinquent novel as we usually think of them. One of the main characters is the warlord of a gang, and there’s a rumble at a bowling alley (although it takes place mostly off-screen), but this is actually a tidy little crime/suspense novel that takes place in about twelve hours, one hot Saturday night in a bad neighborhood in Philadelphia known as the Jungle.

There isn’t really a protagonist in this novel. Instead we have a large cast of characters weaving in and out of the story, including the above-mentioned gang warlord, his toadying sidekick, a hanger-on from a rich family who’s really a brutal sociopath, an old cop with a drinking problem, his beautiful daughter, the old cop’s idealistic rookie partner, a wealthy reformer who wants to clean up the city’s youth gangs, and a scheming underworld boss. Mix them all together and you come up with murder and a desperate hunt for a killer, with some torture and rape thrown in for good measure. GANG RUMBLE, as you might expect, is a pretty lurid book.

It’s also very well-written, and old paperback pro Aarons keeps the pace rocketing along. I had no idea what was going to happen next and kept flipping the pages to find out. If there’s one flaw in this book, it’s that the ending isn’t quite as dramatic as it could have been, which actually is pretty common in Aarons’ books, as if he can’t quite bring himself to go all the way over the top.

Despite that, I really enjoyed GANG RUMBLE and give it a high recommendation. As far as I know, it hasn’t been reprinted since being published by Avon in 1958, but Black Gat Books has a new edition coming out soon. It’s an excellent suspense novel and is well worth reading.

I have never heard of a neighborhood or corner of Philadelphia known as The Jungle, but that might just be my ignorance. I should look into how many crime-fiction novels have been set in Philadelphia, beyond such notable examples as the slew from William P. McGivern (THE BIG HEAT through ODDS AGAINST TOMORROW).

Well, there was this short film, made by Temple University students in 1967, and apparently shown in classrooms in Phil:
https://www.imdb.com/title/tt1594563/
https://youtu.be/CpODLe15q4c