The Case of the Silent Partner - Erle Stanley Gardner 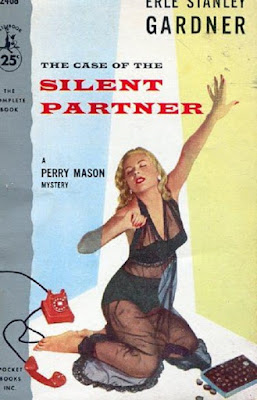 (This post originally appeared on January 17, 2007. I've added a cover gallery of various editions below. I hope this is the last rerun for a while.)

What's a good antidote to a ponderous, over-written book like the one I was talking about in my previous post? How about a Perry Mason novel from 1940, when Mason still wore a fedora, smoked cigarettes, and didn't mind mixing it up with some tough guys if he had to? (Although there's not any real hardboiled action in this one, it does crop up from time to time in the Mason novels from this era.) Not surprisingly, in this book you get a fast pace, an incredibly complex plot, and seldom a wasted word. From the first book, THE CASE OF THE VELVET CLAWS, in 1933 until about the mid-Fifties, the Mason series is consistently entertaining, at least to me.

However, THE CASE OF THE SILENT PARTNER isn't really in the top rank of Perry Mason novels. The motivating action -- the battle for control over a chain of flower shops -- isn't particularly compelling, and Gardner's writing seems a little less crisp than usual. I nearly always get confused when I'm reading a novel by Gardner because the plots are so complicated, and that was true here, too. I did spot a fairly important clue early on that Gardner kept up his sleeve until near the end of the book. There's no big courtroom scene at the end. I know they're hokey, but I like them anyway. The book is notable for being the novel that introduced the character of Lieutenant Tragg. Up to this point in the series Mason's chief antagonist on the police force had been Sergeant Holcomb of the Homicide squad. Paul Drake is mentioned but never appears on screen, and there's no Hamilton Burger at all.

Despite the flaws, I enjoyed the book, and the solution to the murder is pretty darned clever. Worth a look if you're a Perry Mason fan and haven't read this one yet, but I wouldn't recommend it as a starting point for the series.

As you mention hardboiled, I have to say that when I read the early Perry Mason books I picture him not as Raymond Burr but Humphrey Bogart.

Have you noticed that Perry is always the same age, early thirties, at least until WWII. Then he's in his forties until after the War, when he goes back to being in his thirties.
I think this book is one that was used for a tv episode. I agree that some of these are better reads than others, but there's a pretty consistent level of enjoyment.

I grew up watching the old TV show, so the image of Raymond Burr as Mason is hard-wired into my brain. Years later when I started reading the original novels, it caused a bit of a disconnect for me. Gardener’s Perry absolutely acts more like a P.I. at times (especially in the earlier ones as you said, James) so part of my brain kept wanting to put a different type of face and form on him , more in the typical P.I. mould (something more “Bogart-ish’, as Martin says above). But Burr’s image kept coming back. And then there’d be a scene where Perry would grab his hat, rush out the door and do some typical dynamic P.I. stuff and my poor brain just couldn’t reconcile the two. I still managed to enjoy the books (overall, I prefer them to the TV show) but to this day, i still get that somewhat “bi-polar” effect whenever I read one.

The new HBO Perry Mason show has much to recommend it , including Matthew Rhys’ dynamic lead performance as Perry. But talk about a disconnect! HBO Perry is almost TOO much the disheveled, unshaven, hard-drinking, chain-smoking etc. P.I. But I still recommend it (with caveats).

I had seen the TV show before I read any of the books, so the characters always looked like the TV cast to me, even in the early books. I guess I'd seen Burr in a fedora enough times (usually playing a villain in a movie) that I never had any trouble picturing him as the tough guy Perry Mason.

I can't decide whether to watch the HBO version. I generally don't like it when they "re-imagine" an old series or movie. Occasionally, though, it works.

James, I found I could accept all the ‘re-imaginative’ changes in the HBO show if you look at them in the context of the first season being an “Origin Story”. I won’t say more than that so as not to spoil it. There are enough nods to the books and the TV series to convince me the makers are well-versed in the canon; the adjustments they made to the entire cast of characters seem very respectful to me, and none of those changes throw the baby out with the bath water, so to speak.

It’s DEFINITELY an “R-Rated” take on the character and his world, in terms of sex, violence, foul language, and all that good stuff, which I totally understand might be a deal-breaker for some. And i think it does have some pacing problems (which I find is pretty common with mini-series these days, for some reason).

Other than that, I thought it was very well done, one of the better cable/ streaming series I’ve seen in awhile. The cast is uniformly dynamite, the writing is sharp, and the look and feel of it are pretty amazing .The production design and cinematography are stunning, and the re-creation of Southern California / Los Angeles / San Fernando Valley in the 1930s is utterly immersive and convincing.

I might suggest trying the first episode — I think you’d know about halfway through that first hour if it’s gonna be your cuppa Joe or not. But who knows — Max Allan Collins apparently didn’t dig it (which, honestly, kinda surprised me, because it occasionally reminded me of his Nate Heller books)….

As a child of the 50's, it's hard to picture Mason as anyone other than Raymond Burr. What a great character!