The Complete Cases of the Rambler, Volume One - Fred MacIsaac 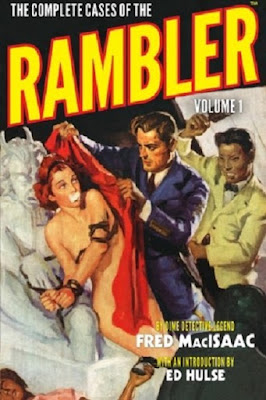 I’ve seen Fred MacIsaac’s name on the cover of many, many pulps over the years. He was very prolific for two decades, the Twenties and Thirties, and sold to most of the top pulps, turning out mostly mystery and adventure yarns, with the occasional foray into science fiction. Despite my familiarity with his name, though, I’d never actually read any of his stories until recently, when I tackled a collection of his mystery stories from Altus Press, THE COMPLETE CASES OF THE RAMBLER, VOLUME ONE, which includes an excellent introduction by Ed Hulse.

The Rambler is itinerant reporter Addison Francis Murphy (although in his first appearance, his name is Addison Dexter Murphy), a lanky, redheaded young man who has a habit of getting fired from whatever newspaper job he’s working, but that doesn’t keep him from getting all kinds of scoops and breaking big stories, as well as tackling all kinds of crooks and winding up in danger most of the time. He’s brilliant but prefers being a tramp and drifting around to staying in one place and building a career.

His first appearance is in “The Affair at Camp Laurel”, which was published in the October 8, 1932 issue of ARGOSY, the only story in the series to appear in that venerable pulp. The other Rambler stories were all published in DIME DETECTIVE. This debut is more of an adventure yarn, without much detecting going on as Murphy infiltrates an isolated upstate New York hunting and fishing camp belonging to a rich man who has started behaving eccentrically after being missing for a while in Africa while on an expedition. Yeah, it’s kind of a complicated back-story, and not everything turns out exactly as you might expect. MacIsaac spins the yarn in a breezy, fast-moving style that’s pretty enjoyable.


By the time Murphy shows up again in the April 1, 1933 issue of DIME DETECTIVE in the story “Alias Mr. Smith”, he’s acquired a new middle name (as mentioned above), he has black hair instead of being a redhead, and his nickname is now The Rambler (that name is never used in the first story). He’s in Boston, and he gets himself a job on one of the papers there by promising to turn up an explosive story. He does that by getting in the middle of what appears to be an open-and-shut murder case in which the victim named her killer before dying. Murphy insists that the alleged murderer is innocent, which brings him to the attention of corrupt politicians, gangsters, and hired killers. Sure enough, Murphy uses an unusual clue to break the case wide open. This story is a little more complicated than the previous one but races along in the same entertaining style.


As the third story, “Ghost City Set-up”, opens in the September 1, 1933 issue of DIME DETECTIVE, Murphy actually has some money in his pocket, several hundred dollars, in fact, as he rides across country on a train bound for San Francisco. The reason Murphy is flush is a neat bit of meta-fiction before the concept even existed. It seems that a while back, Murphy met a guy who wrote stories for the pulp fiction magazine and told him about an adventure he had at an isolated hunting camp in upstate New York—“The Affair at Camp Laurel”, of course, which the pulpster (clearly MacIsaac himself) turned into a story and sold to a “major magazine” (ARGOSY). So this explains why some of the details are different in that first story. The writer didn’t remember them correctly when he wrote it.

Of course, that doesn’t explain why Murphy is a redhead again in this one, but hey, let’s not get fanatical about this. Especially when the stories are so gosh-darned entertaining. This time, Murphy spots a rich, beautiful society dame who’s in the process of getting a divorce. When she gets off the train at Reno, and so does a gangster Murphy also recognizes, our intrepid reporter’s nose for news scents a story. Instead of continuing on to San Francisco, he gets off the train in Reno, too, and soon finds himself up to his neck—and deep in an abandoned mine—in a wild, dangerous affair with millions at stake. As usual, it’s great, breakneck fun.


Murphy makes his next appearance in the June 1, 1934 issue of DIME DETECTIVE, in a story called “Go-Between”. He’s made it to California, but not San Francisco. Rather, he’s in Malibu, where he wakes up with a hangover in the beachfront bungalow of a beautiful movie actress. Before you know it, the girl’s been kidnapped, and the gangsters who snatch her force Murphy to act as the go-between for the delivery of the ransom. More complications arise, of course, as the story races along at a breakneck pace in MacIsaac’s breezy, very entertaining style.


At the end of “Go-Between”, Murphy is sailing off to the South Seas. When “Murder Reel” (DIME DETECTIVE, August 15, 1934) opens, he’s returned from that voyage and landed in San Francisco at last, where he gets a job with one of the local papers and is assigned the story of a mysterious woman who registered in a hotel under a phony name, was murdered a few days later, and is still unidentified. The only clue in the case is a possible connection with a local politician. There’s plenty of colorful action in this yarn and Murphy is as appealing a protagonist as ever, but it’s the weakest Rambler story so far because the solution to the murder involves two really far-fetched coincidences that stretch credulity past the breaking point.


“Heir-Cooled”, from the June 15, 1935 issue of DIME DETECTIVE, wraps up this first volume of the Rambler’s cases. It’s a considerable improvement on the previous tale. Murphy is back in New York, investigating a jewel robbery and the heart attack death of a financier that may not be natural causes at all. The case has threads that stretch all the way to Miami and the Bahamas, although Murphy doesn’t leave the Big Apple except for a short journey when he gets taken for a ride by gangsters. He survives, of course, but not without some fine action from MacIsaac. It’s another very enjoyable story.

I had enough fun reading all of these yarns that I was left wanting more. Fortunately, there’s a second volume of Rambler Murphy stories from Fred MacIsaac, and I already own a copy, so I suspect I’ll be moving on to it in the reasonably near future. Meanwhile, if you’re a fan of pulp detective stories, I give THE COMPLETE CASES OF THE RAMBLER, VOLUME 1 a high recommendation.

The Rambler is one of my favorite of the Altus/Steeger Dime Detective reissues.
The stories are fast, full of odd twists and sharp bursts of action.
Plus the protagonist is not just a great guy but a distinctive hero of a bygone America.

The whole idea of an itinerant reporter who rides the rails between jobs, often close to penniless but with such a sterling reputation that he can get hired instantly at most any newspaper in the country because he is virtually guaranteed to uncover a huge story in a matter of days…it’s just so American, so Depression era, and so idealistic.

I found the second collection of Rambler tales as enjoyable as the first and hope Steeger produces more volumes before too long.
I heard there’ll be a new batch of Dime Detective collections appearing shortly, so I’m hoping to buy myself some Christmas presents.