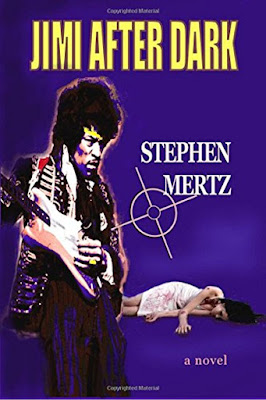 Steve Mertz has been writing great mystery and action/adventure novels for a long time, but there's something special going on when he sets his stories against a music industry background. A longtime bluesman himself, Mertz brings a passion and enthusiasm to his music-themed novels that elevates them and makes them some of my favorite books of recent years. Such is the case with his latest, JIMI AFTER DARK, which finds Jimi Hendrix in London and in all sorts of trouble, besieged by women, gangsters, and maybe something even more sinister, with only the narrator known as Soldier (an old friend from Hendrix's army days) to help him.

Based on both documented history and events that may or may not have taken place, JIMI AFTER DARK is fast-paced, full of action and plot twists and interesting characters, as well as a vivid depiction of the London music and club scene during the Sixties. Plus that special Mertz magic mentioned above. I think HANK AND MUDDY (featuring Hank Williams and Muddy Waters) is still my favorite of his novels, but JIMI AFTER DARK is a very, very close second. Highest recommendation on this one.

James: Thank you for the kind review of Stephen Mertz's book. The story makes me sad I missed swinging London . . . swinging everywhere, in fact!