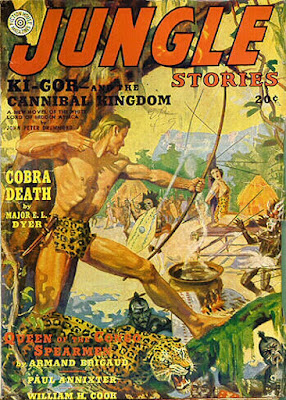 Well, I knew that if I continued reading the Ki-Gor novels in order, I'd get to some that weren't, shall we say, top-notch yarns. For the sake of completeness, though, a few words about KI-GOR—AND THE CANNIBAL KINGDOM, from the Summer 1940 issue of JUNGLE STORIES.

First of all, it's actually not badly written. The prose flows fairly well, the settings are described nicely, and the action scenes are okay, if rather sparse. I have no idea who was behind the John Peter Drummond house-name on this one. But whoever it was neglected to come up with much of a plot. Ki-Gor goes to the aid of his old friend and sidekick George Spelvin, the former railroad porter from Cincinnati who's become the chief of the M'Balla tribe in Africa, when George and his people are attacked and besieged by a horde of cannibals. That's all there is to it. A lot of the novel consists of Ki-Gor and his beautiful redheaded wife Helene (who's given nothing to do) traveling from one place to another. There's one nice bit near the end where Ki-Gor exposes a jungle con-man, but that's not enough to save a plot that really needed a few twists.

One other way in which KI-GOR—AND THE CANNIBAL KINGDOM is noteworthy is that it's the first story, as far as I recall, in which George Spelvin is referred to as Tembo George, Tembo meaning elephant (because he's a great big guy, of course). This is the name by which he's known for the most part in the rest of the series.

At some point I'll have to start skipping some of the stories because I don't have all of them, but I probably have 80% of the series in one form or another (all reprints except for one issue of JUNGLE STORIES). For now, though, I'm going to continue reading them in order and writing about them here from time to time. If you're following along at home, though, you could probably skip KI-GOR—AND THE CANNIBAL KINGDOM without missing much. Sad but true.

Great title. I've got some of these but haven't read them. Maybe this summer

I read the first Ki-Gor not long ago and enjoyed it. I got an ebook with the first several novels in there. Not sure but they are there for when I need them

Ugh -- yeah, that one is terrible. I hate that step-n-fetch accent they give George in some of these early ones. I keep saying it, but I'll say it again -- reading all these early ones in a row is going to be pretty rough, and I applaud your stamina. If I'd started with some of these I'd never have gotten to the good ones...

Howard, at this point I think it's just sheer stubbornness on my part.