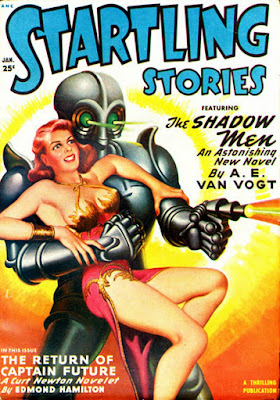 Captain Future, for those of you who don't know, was a pulp hero whose space opera adventures appeared in a series of novels in his own magazine and then in STARTLING STORIES. His real name was Curt Newton, and there's a touch of Doc Savage influence in his background, as he was raised in a laboratory on the Moon by Simon Wright, a scientist whose disembodied brain lives on in a box, a giant robot called Grag, and a shape-shifting android named Otho. When he was just a baby, Curt's parents were murdered by an evil rival scientist, so he grows up sworn to battle crime across the Solar System, along with his three strange allies who come to be called the Futuremen.

This series was created by editor Mort Weisinger and written mostly by Edmond Hamilton. The stories start out fairly juvenile but great fun, and when some of them were reprinted in paperback during the Sixties (my introduction to the series), I ate 'em up, reading and enjoying every one I could get my hands on. Later on, I was able to find some of the original pulps and read a few of the novels that weren't reprinted.

The thing of it is, although the series may have started out being aimed primarily at kids, it evolved over time as Hamilton began writing more serious science fiction. The juvenile trappings are still there all the way through, but the plots widen to an epic level as Curt Newton and his friends tackle such mind-boggling mysteries as the origins of humanity and the creation of the universe itself.

In the late Forties the series, which by then was appearing in STARTLING STORIES, disappears for more than three years. But the cover of the January 1950 issue of the magazine (an iconic cover painting by Earle Bergey, by the way) heralds "The Return of Captain Future", and Curt's back, all right, along with all his supporting cast. In an unusual move for the pulps, the story accounts for Captain Future's absence by explaining that he and his Futuremen set out more than three years earlier on an expedition to find the Andromeda Galaxy. In previous adventures, they had found evidence that this is where the human race originated. But they never came back, and everyone assumes they died somewhere out there in the far reaches of space.

Of course, that's not the case. On a visit to the moon laboratory, Joan Randall, a member of the Space Patrol who also serves as Curt's romantic interest, and the grizzled old space marshal Erza Gurney discover that Curt and the Futuremen are not only back, they've brought with them the only surviving member of an ancient race of conquerors that once ruled the galaxies. This incredibly powerful alien being is held in stasis at the moment, but Curt plans to revive it so he can interrogate it.

What could possibly go wrong?

Well, of course, things do go wrong, but how they play out might not be exactly what you'd expect. The resolution is more in line with Hamilton's increasingly serious approach to the series, and by this time the old World-Wrecker (as Hamilton was sometimes known) had developed a definite poetic streak in his writing. The ending of this story had me nodding my head and saying out loud, "That's good stuff."

"The Return of Captain Future" is the first of seven novellas to appear in STARTLING STORIES in 1950 and '51. I had never read any of them until now, but they're all collected in a trade paperback called CAPTAIN FUTURE: MAN OF TOMORROW. I'll be reading the rest of them and posting about them as the weeks go along. For now, if you're looking for space opera yarns with a slightly more serious slant that are still highly entertaining, you can't wrong with Captain Future.

I've not read the Captain Future stories yet, but I do have the ones Haffner Press has collected in some nice hardcovers. Hamilton isn't given enough credit for the writer he became later in his career.

The only thing by Captain Future I've read is an Allan Steele story called "The Death of Captain Future." It was from the 90s, in Asimov's magazine, IIRC. It also landed into a massive space opera anthology. But I've always wanted to read the original pulps, especially since I learned who Hamilton was and what he wrote.

This anthology you mention looks to be the perfect entry point.

BTW, there's a brand-new Captain Future novel just out this month called AVENGERS OF THE MOON by Steele. The cover is fantastic.

I've not read the Captain Future stories yet, but I do have the ones Haffner Press has collected in some nice hardcovers. Hamilton isn't given enough credit for the writer he became later in his career.

The paperback series was my introduction to the Futuremen. You had to pay close attention as they were published because "Captain Future" wasn't often in the title or mentioned on the cover. It's great to see the stories are still in print, and Allan Steele has done a great job keeping the characters going.

With Bergey girls and BEMs on the cover you can't go wrong. A thing of beauty.

I haven't read a lot of these but enjoyed the ones I have. I should pick up a collection of them at some point.

My experience of Captain Future parallels yours, James. I got a paperback copy of Captain Future's Challenge while on a family vacation when I was 9 or 10 and it rocked me to the soles of my feet. I was a Doc Savage fan and loved the idea of a similar crime busting team working the spaceways. And there was an awesome space battle in an asteroid belt that I remembered many years later when I saw The Empire Strikes Back.

I read a number of the paperback reprints over the years and cannot recall them separately. I do have a fine memory of one in which the Futuremen have to head to some impossibly distant cosmic destination, the center of the universe or something similarly incredible. They engage an experimental engine to increase their speed exponentially, a 'vibration drive', which kicks in and boosts their spacecraft to unheard of velocity....and the stars they're aiming at appear to get no closer. This produced a dictionary definition classic example of old school Sense of Wonder in me. I set the book down and gaped at the wall, stunned by the epic scale of the cosmos and the adventure I was reading.
The Golden Age of Science Fiction, to be sure.

Hamilton exemplified "sense of wonder" as well or better than any author of that era. A very fine writer in all different phases of his career.

I'm ordering this now! Thanks for the heads up!

I have heard but can't state authoritatively, that Leigh Bracket actually wrote the novelet length Captain Future stories, which would explain their greater poetic writing and sensitivity. That Bracket was the writer would explain why the character was brought back at a time when the editor was trying for a more mature line of SF

I hadn't heard that about Brackett, but it's certainly possible. I did read somewhere that Hamilton was actually the one who expanded some of Brackett's pulp stories into Ace Double novels published under her name. I have a hunch that by the late Forties, both of them had at least some input into everything, no matter whose name was on it, much like Kuttner and Moore.

I guess it depends on how you define collaboration. Livia has had significant input on the plots of many of my books, as well as editing and polishing the manuscripts, so I regard her as an uncredited collaborator on all of those. We've never actually done the "I write a while and then you write a while" bit, though.

James, I agree it depends on how you define collaborate. I think Brackett was referring to both composing the words as the story was written.