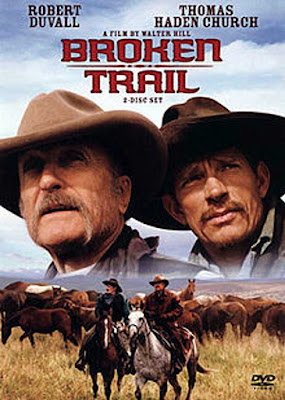 We missed this Western "mini-series" (actually a glorified two-part TV movie) when it came out in 2006 and never got around to watching it until now. Robert Duvall and Thomas Haden Church play uncle and nephew, respectively, who take a herd of horses from Oregon to Sheridan, Wyoming, in 1898 to sell them to a representative of the British government looking for war horses. Along the way they wind up taking care of five young Chinese women who have been sold to a madam in a Wyoming settlement for a life of prostitution. When Duvall and Church won't turn the women over to the madam, she sends a brutal gunman after the drive to retrieve them and kill their protectors.

That's the plot, which would have made a nice, taut, hardboiled 90 minute Western. To stretch it out to twice that length, there's a lot of spectacular Canadian scenery (like so many Westerns in the past 20 years, BROKEN TRAIL was filmed in Alberta), some romance, and a lot of scenes of the horses being driven along. The pace is leisurely, even meandering. But eventually, even most of the scenes that seem like filler do have some sort of payoff, and the ending is very satisfying.

What really makes this film work are the performances of Duvall and Church, both of whom have the sort of weatherbeaten, lived-in faces appropriate to Westerns. Duvall, of course, can do this sort of stuff in his sleep, but he works at it and doesn't phone in his performance. I think of Church primarily as a comedic actor, but he's fine as a cowboy with a stubborn streak, and impressive enough that I wish he'd made more Westerns. Greta Scacchi is also good as a soiled dove who throws in with them to get away from her life.

BROKEN TRAIL is one of those movies that has a lot of excellent individual scenes. While those scenes don't add up to a great Western, it is a good one, very watchable and entertaining.
Posted by James Reasoner at 5:30 AM

I still have only seen bits and pieces of it but liked what I aw. I need to catch the whole thing

I was so dissapointed with this one...it could have been so much better

Of course, Duval can play any part, but I find it hard to imagine THC in this. Mostly his voice seems wrong to play in Westerns. But glad it worked for you.

I didn't think Church was a good fit for a Western, but I wound up liking his character and thinking he did a good job.

I gave my compliments directly to Walter Hill on this one---I liked the pace a lot and the conclusion resonated emotionally with me as well. Alongside, The Jack Bull (a terrific HBO movie starring John Cusack) and the Assassination of Jesse James by the Coward Robert Ford, The Broken Trail is one of my favorite post-Unforgiven westerns.

Church is pretty good in it, but Duvall is incredible. This is no surprise when considering that Robert Duvall is the platinum standard of acting.

Robert Duvall makes this movie a great one and he is one of my favorite actors. He was also excellent in the mini series LONESOME DOVE. It's a shame that age has now limited his career.

Lonesome Dove was very good---the book is a bit better though. Chris Cooper was great in it as well.
And again I say, Robert Duvall is the master. The Platinum Standard of acting, now and forever.

And so was Open Range; together with Lonesome Dove these movies form Duval's Western trilogy. Outstanding acting!

I've recorded this one at least twice and lost the recordings before getting around to seeing it...there's some sort of curse. A great fan of the cast, as well, so I will catch up with it eventually...