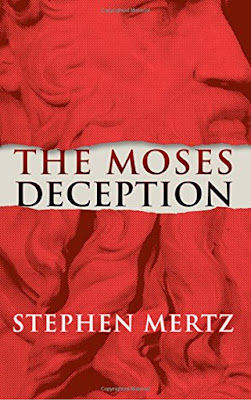 Archeological thrillers have become quite popular over the past twenty or so years, but as you'd expect when Stephen Mertz tackles a genre, you're not going to get the same old same old, as the saying goes. True, in his recent novel THE MOSES DECEPTION, you get a male/female pair of intrepid archeologists, but they're not involved in a romantic relationship as so often happens in books like this. Rather, Drs. Adam Chase and Lara Newton are partners and allies, although there is some attraction between them. Sure enough, on a dig in the Middle East, they make a discovery with implications that could change the entire world: fragments of the original Ten Commandments that Moses broke when he came down from Mount Sinai. And according to these fragments, there was an eleventh commandment that no one ever knew about because Moses kept it to himself (hence the title).

Adam and Lara are already in an area plagued by violence, and this momentous discovery just puts them in more danger, as it's important enough for various factions to kill over, which is exactly what happens as the two of them try to reach safety at the estate belonging to their wealthy backer in the Swiss Alps. Much double-crossing and intrigue ensues.

What really sets THE MOSES DECEPTION apart is Mertz's writing, which as usual is lean and fast-paced and filled with action and compelling characters. So many thrillers these days are bloated, with page after page of padding that puts me to sleep. Not so anything by Steve Mertz, who has been one of the top action writers in the business for the past forty years. THE MOSES DECEPTION is great entertainment and highly recommended.

Just got my copy. Can't wait to read it. Steve's become one of my very favorite writers.

Fro 99 cents, this is certainly a no-brainer.