Hardboiled, Noir, and Gold Medals: Essays on Crime Fiction Writers from the 50s Through the 90s - Rick Ollerman 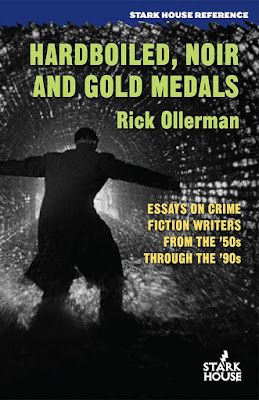 Rick Ollerman's detailed critical essays, written about both modern and classic crime writers, have an electric-charged verve so brilliant the modern reader is compelled to develop a new understanding, a new appreciation, even a new witnessing of the writers and their most important and influential works. The context is always truthful to the era of creation, but it is fully developed with a modern understanding that brings new revelation to seemingly old topics. Which is a hard way of saying, Mr. Ollerman writes about crime fiction and its crafters brilliantly. --Benjamin Boulden, critic/essayist

An introduction by Rick Ollerman is always a promise of insightful, informative, and entertaining details about the author or topic. His essays are as valuable as the restored fiction that follows. --Alan Cranis, Bookgasm

Reading one of Rick Ollerman's essays is like sitting in a master class on the writer. Having all of the essays in one collection is like getting a master's degree. This is an important book and a must-have for anybody who cares about good criticism, about the writers discussed, and about crime fiction in general. --Bill Crider, mystery author

Anybody who's read many books from Stark House Press knows that Rick Ollerman's great introductions are often worth the price of the book by themselves. Now all of those essays have been collected in this volume, along with a number of new ones written for this book. If you have any interest in hardboiled and noir fiction, this is a collection that you'll find yourself dipping into again and again. Great stuff, and highly recommended.

I will have to get this one. Thanks for the heads-up.

Well, this is about as an automatic must-buy as it gets. Looks like it has a 8/4 pub date...can't wait. Thanks for the heads-up, James.