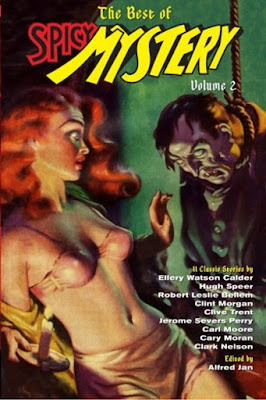 All of these are good stories and I enjoyed them a great deal, but there are some stand-outs. Victor Rousseu's "She Who Was He!" is a pretty bizarre tale of involuntary transgenderism (!) and murder. "Taupoo Dance" by Robert Leslie Bellem has an unusual setting for a Weird Menace story: a tropical island in the South Seas. "Blind Flight" by Edwin Truett Long takes place for the most part on an airplane flying through dense fog, also not a typical Weird Menace setting, and Long's "Red—For Murder" is a pretty good crime yarn with several nifty twists packed into a few thousand words. I've never read much by Long, but those two stories impressed me. His other entry in this volume, "False Face", starts out well but kind of falls apart at the end. As for the more traditional Weird Menace stories, Bellem's "Labyrinth of Monsters" is my favorite; grisly and very action-packed. I don't know if there'll be a third volume in this series, but if there is, you can bet I'll read it.

I love your reference to "Scooby-Doo endings" in mystery stories! I'll have to track down a copy of THE BEST OF SPICY MYSTERY, VOL. 2.

Nice collection and well worth having. I have always loved this cover, years ago Frank Robinson was selling large size cover repros of pulps and among the ones I bought from at that time was this cover. I have it framed and it hangs in my Pulpcave.

What I've found with the horror/weird menace pulps I've read is that you get one or two good stories per issue, and everything else is basically filler... but the good stories can be very good indeed!

I don't think I can put off getting this one any longer.
Isn't Bellem's Labyrinth of Monsters in Tony Goodstone's old anthology The Pulps?
If it's the story I'm thinking of it warped my youthful brain but good.

Yes, it is in the Goodstone book. I'd forgotten about that. But it's been probably 30 years since I read that anthology. Definitely brain-warping material . . . but in a good way.

In my introduction to this anthology, I mentioned that Labyrinth of Monsters was previously published in Goldstone's book, but deemed it worthy of reprinting today. Volume 3 will be out as soon as Altus Press gets around to it. There are many books ahead of mine in the pipeline.

Alfred, I'm really glad to hear that Volume 3 is in the works. These are great collections!

I meant GOODSTONE, of course.