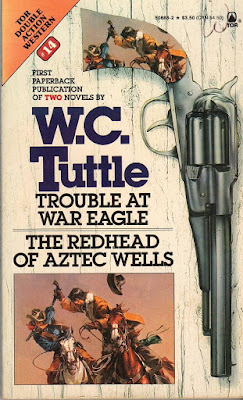 I've mentioned many times how much I enjoy W.C. Tuttle's stories and novels featuring drifting range detectives Hashknife Hartley and Sleepy Stevens. The short novel TROUBLE AT WAR EAGLE is from very late in the series, but it shows that Tuttle hadn't lost any enthusiasm for or skill in writing about his best-known characters after 30 years of chronicling their adventures. In this one, Hashknife and Sleepy stop at an isolated railroad flag depot to warm up on a cold and rainy night. They've barely gotten there when a cowboy comes in to send a telegram, and that unfortunate soul has barely started writing out his message when a shot comes from outside in the dark and kills him. The murderer gets away, but mere moments after that there's another shot, and Hashknife and Sleepy find a badly wounded man behind the depot. Nobody knows who the murdered cowboy is, but the wounded man is one of the local cattle barons, who's engaged in a hot feud with the area's other dominant rancher.

Well, naturally Hashknife can't stand to see this mystery go unsolved, so he starts poking around in his usual low-key, folksy manner, assisted not only by Sleepy but also by the local deputy, "Honey" Moon, who's an old friend of theirs. (In Tuttle's stories, deputies are nearly always smarter than the sheriffs they work for.) There's a Romeo-and-Juliet romance—only it turns out "Romeo" has vanished mysteriously—and the looming threat of sheep—sheep!—moving into the valley, as well as a kidnapping and assorted shootouts. Along the way there's plenty of humorous banter but not much of the slapstick comedy you sometimes get with Tuttle. The focus stays primarily on the mystery element, which is okay with me. It's great fun watching Hashknife untangle everything. Like most great fictional detectives, he's always two or three steps ahead of everybody else, as you realize when you get to the end and see how neatly he's carried out his investigation. 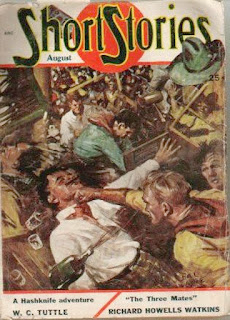 The history of this novel has a mystery to it as well. It was reprinted in 1991 by Tor, in a double edition along with another short novel of Tuttle's entitled THE REDHEAD OF AZTEC WELLS (which I'll be reading in the fairly near future, I expect). The copyright is 1950 by Short Stories Inc. The problem is, no Tuttle story called TROUBLE AT WAR EAGLE appeared in SHORT STORIES in 1950 or any other time, or anywhere else, for that matter. However, in the August 1950 issue of SHORT STORIES, there's a Hashknife yarn called "The Kingdom of Cole", and because there's a character in TROUBLE AT WAR EAGLE named Cole, I assume it's the same story, although I don't have the pulp to check and be certain. If that's the case, I don't know if Tuttle or the editor at SHORT STORIES came up with the title. TROUBLE AT WAR EAGLE may have been Tuttle's original title, or whoever edited the double edition at Tor may have come up with it. To me, TROUBLE AT WAR EAGLE sounds much more like a typical Tuttle title (say that three times fast) than "The Kingdom of Cole". At this late date, we'll never know, but I find such speculation interesting.
Posted by James Reasoner at 5:30 AM

I agree with you about WC Tuttle. He has been unjustly forgotten. His best series was definitely the Hashknife and Sleepy novelets. Though Tuttle wrote the series during the twenties, thirties, and forties, I would say the best period were the stories in ADVEMTURE in the twenties. He was big in baseball also. I read somewhere that he was the president of the influential Pacific Coast League.

James, what would be the best title to read first?

I'd probably look for a standalone novel, not a pulp mag format...


would you recommend reading these in o

Yes Tuttle was the president of the Pacific Coast League from 1935 to 1943 and the league was a very big deal indeed as there were no major league teams on the Pacific coast and wouldn't be for many years to come. Tuttle wrote an autobiography MONTANA MAN (Avalon 1966) and he lived a fascinating life. He was born in the Montana Territory in 1883 in the living quarters above the local jail. His father was the sheriff and one of his uncles was a deputy. After working as a sheepherder, Tuttle wrote news and feature stories for newspapers and then broke into the pulps and became a mainstay at Adventure. He eventually went to Hollywood and did some screenplays and became good friends with Harry Carey, Sr. and Hoot Gipson before his baseball years.

I love Tuttle's stories and the Hashknife and Sleepy series is a favorite. Tuttle also wrote for the outdoor/hunting magazines as he was a avid duck hunter.

Tuttle wrote some humorous baseball stories as well as his Westerns. They're pretty good, although I like the Westerns more.

Greg, there's no order to the series and a bunch of them were reprinted in paperback, so any that you can find inexpensively would be a good place to start. SHOTGUN GOLD is a particularly good one, as i recall, but it's hard to go wrong with Tuttle.

I enjoyed W. C. Tuttle's The Sherlock of Sageland published by Altus Press. It has all the humor and wit of Hashknife and Sleepy stories with very engaging characters.

I converted the 1948 Popular Library edition of the Hashknife and Sleepy novel "Hidden Blood" to ebook recently if anyone is interested.

WC Tuttle is one of my favorites. Hashknife stories are great and Hashknife has a very "zen like" way that is interesting. Quite a fatalist. Henry series is excellent, though in small doses. There is a Henry movie out there, I have never seen it.

I have a Henry collection culled from pulps and bound and autographed by Tuttle. Which I got for not much on EBAY.

George, I've read THE SHERLOCK OF SAGELAND and really enjoyed it. I haven't posted about it here because I wrote a short article about it that's going to appear in an upcoming book.

Edwin, I'll check my shelves and see if I have the paperback of HIDDEN BLOOD. If I don't, I may be getting in touch with you about that ebook!

Mnl, very cool about the autographed Henry collection. I agree about needing to space the stories out. If you do that, they're very entertaining.