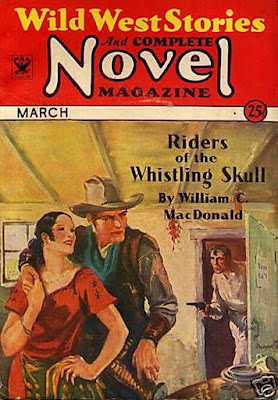 The title of this pulp is a mouthful. That's not a particularly good cover, either. However, this issue of WILD WEST STORIES AND COMPLETE NOVEL MAGAZINE features William Colt MacDonald's Three Mesquiteers novel "Riders of the Whistling Skull", which was made into one of the better entries in the long-running B-Western movie series. And the back-up story in this issue is by Carl Jacobi, better known for his weird fiction and his adventure stories than for his Westerns. So I find it interesting and hope you do, too.
Posted by James Reasoner at 5:00 AM

That title is a mouthful, but ya gotta love the masthead!

I kind of like that cover, and I loved the film (or was it a serial?) of Riders of the Whistling Skull when I was a kid. Eventually, I read the paperback edition of the novel, and it was pretty good, too.

Yeah, the name of the magazine and the cover layout are pretty weak, and look more dime novel than pulp, but that title...Riders of the Whistling Skull, has a fine pulpy resonance. I've never seen the film, does the novel live up to the title?

The movie version is a regular B-Western, 58 minutes long. Here's the IMDB page for it:

Bob Livingston had already replaced John Wayne as Stony Brooke by this point, but I've always liked Livingston okay in this series.

I've never read the book, so I can't say how it compares, but I've liked everything I've read by William Colt MacDonald.

The Satanic Piano by Carl Jacobi is one of my favorite Weird Tales.

I looked up that Jacobi story to see if maybe it had been reprinted in anything I might have, but unfortunately not. It's in the Jacobi collection REVELATIONS IN BLACK, which is pretty pricey. But one of these days I'll probably pick up a copy.

My goodreads review of Revelations in Black/Carl Jacobi:
""This collection of horror and science fiction/horror tales reminded me of MR James and Robert Aickman, though I actually preferred Jacobi's tales. Revelations in Black is engaging for its duration, with only one very short exception (A Pair of Swords is a trifle).
Carl Jacobi is very good at coming up with an engaging premise---I was interested in each tale in a matter of sentences---and often these set ups involve weirdly affected objects, such as a cane, book, kite, piano, etc. The prose is smoother than many of his pulp contemporaries and the atmosphere is always rich.
What keeps Jacobi's tales from greatness tends to be his plotting, which often relies upon characters compelled to do unlikely things, and his resolutions, which are usually blunt and far less creative than the initial weird set ups (this criticism I feel holds true with MR James as well). But every tale (except for the aforementioned trifle) is engaging and atmospheric, and whenever Jacobi dabbles in pseudo-scientific "science fiction" (A Study in Darkness, Moss Island, Cosmic Teletype, etc.) the logic he employs is really entertaining and the plotting is far less predictable.
Additionally, I should point out that there is one real stunner in this collection-- a story called, The Satanic Piano. This one is longer than most of Jacobi's stories and inventive throughout it's duration; it's the zenith achievement in the book---a tale that ranks with the works of weird fiction masters like Clark Ashton Smith, HP Lovecraft, Arthur Machen, Donald Wandrei, and Algernon Blackwood.
Overall, Revelations in Black is a very enjoyable collection that contains a lot of memorable images.""