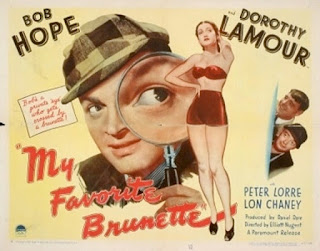 I remember watching Bob Hope . . . well, as far back as I can remember. He was always on TV when I was a kid: hosting the Academy Awards, doing one of his frequent specials, or in some old movie being rerun. But despite that, I never saw MY FAVORITE BRUNETTE until now.

Hope plays a hapless baby photographer who winds up in prison and is about to be executed for murder. But before he's taken to the gas chamber, he tells his story to a group of reporters, and that leads to the flashback that takes up nearly all of the movie. It seems that his photography studio is next door to the office of a private detective (played in an uncredited cameo by a big star of the day) and Hope's character has always wanted to be a detective himself. As he says in a voice-over, "All it takes to be a detective is courage, brains, and a gun. I had a gun." Naturally, one of the real detective's potential clients comes in, mistakes Hope for him, and he plays along with it, hoping for some excitement. It certainly doesn't hurt that the client is a beautiful brunette. Hmm, a brunette in a Bob Hope movie . . . who else is it gonna be but Dorothy Lamour?

Anyway, you can guess what's going to happen. Hope winds up involved in a case involving a missing baron, an international conspiracy, a knife-throwing assassin (Peter Lorre), car chases, a sinister sanitarium, and the murder for which he's convicted and sent to prison. Will he be saved at the last minute? I think you know the answer to that as well as I do, whether you've ever seen the movie or not. (And the ending includes another uncredited cameo that won't surprise anybody but is still welcome.)

MY FAVORITE BRUNETTE is a movie that's consistently amusing without being laugh-out-loud funny except on rare occasions. The mystery plot is convoluted but mostly makes sense. Hope is his usual wisecracking schnook whose patter breaks the fourth wall now and then. Peter Lorre doesn't have much to do except act sinister, which he could do in his sleep by that point. Lon Chaney Jr. plays a dimwitted sanitarium attendant, a characterization that leads to at least one OF MICE AND MEN joke. This is certainly a decent film, although I wouldn't put it in the top rank of Hope's movies. I'm glad we finally watched it.
Posted by James Reasoner at 5:30 AM

One of my favorite Hope movies as a kid. Not sure if I would feel the same now.

What I still remember after all these years:

The scene where Peter Lorre and Lon Chaney Jr. are throwing knives at a wall, while Peter explains to Lon about separation of governmental powers under the US Constitution.

i watched this scene recently, and it got me to wondering if a certain Present-day Public Figure ...

This and THE GHOST BREAKERS are my two favorite Hope classics. Unfortunately, BRUNETTE is in the Public Domain, so there are many poor-quality video versions of it out there.

A fine movie! Thanks for reminding me of it.

Still my favorite Hope film. Like it much better than the ROAD pictures.