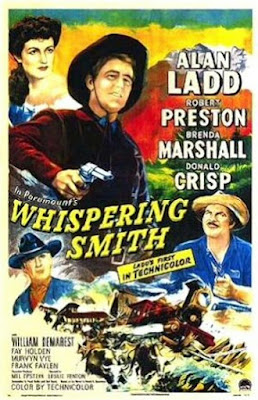 WHISPERING SMITH is another Western that played frequently on TV when I was growing up, but I never watched it until now, possibly because I've never been a big fan of Alan Ladd. Not that I dislike Ladd's movies, by any means, and he's the star of SHANE, after all, which is one of my favorites. But I've also never gone out of my way to watch his films.

This one is based on an early (1916) Western novel by Frank H. Spearman that I've never read, so I can't say how it compares. Ladd plays a railroad troubleshooter named Luke "Whispering" Smith, supposedly because of the way he's able to sneak up on bad guys. Robert Preston plays a roguish old friend of his who also works for the railroad, but in addition to that, he's established a ranch and he's married to the woman Smith used to be in love with. A clash with a by-the-book new superintendant on the railroad puts Preston's character on the owlhoot trail, so you know that eventually it'll be Whispering Smith's job to bring him to justice.

The romantic triangle and the friction between two old friends on opposite sides of the law form the core of WHISPERING SMITH, and since it's only an hour and a half long, that's enough. The supporting cast includes Donald Crisp as the boss of the outlaw gang Preston's character throws in with, William Demarest as another railroad worker, and an almost unrecognizable Frank Faylen as an evil albino gunman named (what else) Whitey. I know Faylen mostly as Dobie Gillis's dad, harried grocery store owner Herbert T. Gillis in the TV show THE MANY LOVES OF DOBIE GILLIS, as well as the likable taxi driver Ernie in IT'S A WONDERFUL LIFE, and seeing him playing a snarling killer in this movie is just . . . odd. Also odd is the way everybody wears their guns in such a high-waisted fashion. If you look at historical photographs, that may be more realistic, but it looks strange in a Hollywood Western from 1948. Ladd is pretty good as Whispering Smith, Robert Preston is always fun to watch, but I didn't care for the third side of that romantic triangle, Brenda Marshall, and I've liked her in other films. I was also a little disappointed that there was no fight on top of a moving train. If you're making a movie about railroaders, you've got to have that, don't you?

WHISPERING SMITH is an okay Western at best. I'm glad I finally saw it, but it's not one I'll ever watch again.
Posted by James Reasoner at 5:30 AM

Unlike you, I'm a fan of Alan Ladd, or was when I was a kid. Shane and The Iron Mistress probably had something to do with it. But even at that, I never cared for this movie. I like the title, though.

Everybody has different tastes. I love this movie, partly because, for once at least, the gun leather is halfway realistic. And I thought the plot seemed fairly reasonable, too. And I'm an Alan Ladd fan.

NEVADA SMITH has its flaws, but overall I like it fairly well. That's one I ought to watch again sometime.

First of all, I've always been a fan of Alan Ladd. Whispering Smith is one of my favorite of his westerns. I did read the book by Frank Spearman, not much like the
movie. How about when Smith was riding away at the end and wiped at his cheek. Could that have been a tear?