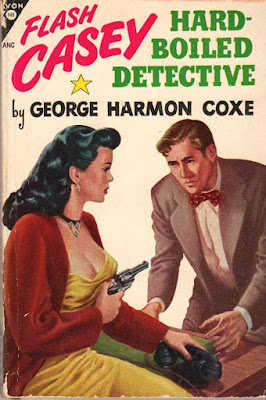 For a long time, George Harmon Coxe was one of the top mystery writers. His novels, most of them featuring Boston crime photographer Kent Murdock, were on all the library shelves. Before Kent Murdock, however, Coxe created another crime photographer who worked in Boston, Jack "Flashgun" Casey. Casey appeared in dozens of stories in the iconic pulp BLACK MASK, as well as a few novels. This early paperback from Avon, published in 1948, reprints four of the Flash Casey novelettes.

"Women Are Trouble", April 1935, finds Casey teamed up with a spunky gal reporter who happens to be a witness to a gangland slaying. He has to protect her as well as keep a vital piece of evidence safe until all the people mixed up in the racket are revealed.

In "Too Many Women", September 1936, Casey also has to work with a young female reporter, and they're assigned to cover a garden party, of all things. But on the way to the party, Casey snaps a picture of a swindler who just got out of prison, and before you know it, that photo is at the center of a complicated and violent plot involving some missing loot. This one suffers a little from having such a similar set-up to the first story. BLACK MASK readers probably never noticed since the stories were published more than a year apart, but I think if I'd been editing this collection, I would have put it last. Also, there's one plot angle that I don't think was ever explained. All that said, the story rockets right along and is very enjoyable.

"Casey—Detective", from February 1935, has what sounds like a pretty generic title, but it actually makes sense in the context of the story. In this one, Casey stumbles over the murder of a former bootlegger's ex-wife, clashes with the cops, and gets to the bottom of a tangle involving blackmail and kidnapping. It looks like the case is just about solved halfway through, but of course that turns out not to be true and there's still more action to come.

"Once Around the Clock", from May 1941, was also reprinted in the anthology THE HARD-BOILED DETECTIVE, edited by Herbert Ruhm, where I read it more than thirty years ago. However, I didn't remember a thing about the story, so I was able to enjoy it all over again now. Casey tries to help a young ex-con who's on the run from the cops, blamed for a murder he didn't commit, and clearing the man's name means also solving another murder several years in the past. A nice twisty plot and plenty of action since the story takes place from one midnight to the next.

I like the Kent Murdock novels I've read quite a bit, but I've always been a little more of a Flash Casey fan. Murdock, though plenty tough when he needs to be, is more urbane and sophisticated, while Casey is a big, two-fisted bruiser. Coxe's stories are always well-plotted and have plenty of action and a nice hardboiled tone. He's mostly forgotten and shouldn't be. This is an excellent collection and I really enjoyed it.
Posted by James Reasoner at 5:30 AM

Ya gotta love crime stories that have the protagonist teaming up with a "spunky gal reporter."

I have been meaning to read some of these stories (they are in my well loaded Kindle). The radio series "Casey, Crime Photographer" is fun.

I reviewed this, under a slightly different title,
https://tipthewink.net/2017/05/11/forgotten-book-flash-casey-detective-by-george-harmon-coxe/

I liked it a lot. I haven't read any of the Murdock tales yet, though I have a couple of them, but of the Casey I've read, I can say I'm a fan.

I've read maybe half a dozen of the Kent Murdock novels and enjoyed all of them, but my favorite is THE JADE VENUS, an excellent post-World War II tale that finds Murdock returning from service as an intelligence agent during the war.

I'll keep an eye out for that one, James. Thanks.

George Harmon Coxe books used to be common in thrift stores and used bookstores. Now, they've vanished like the buffalo on the prairie.

An interesting item in my collection is "A Crime Photographer Mystery" entitled "Dead Heat" by "Paul Ayres (Bell, 1950). "Ayers" is Edward S. Aarons. The book is a Flashgun Casey novel tie-in to the radio show with Coxe mentioned only on the copyright page.

I never knew such a book existed, Steve. A neat thing to have! The fact that Aarons wrote it makes it even better.